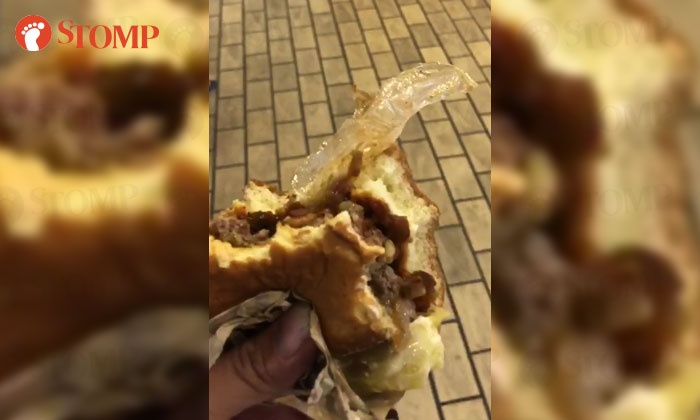 Fast-food chain McDonald's is investigating a case where plastic was allegedly found in a beef burger bought at its Jurong Bowl outlet.

Stomper Christopher alerted Stomp to the incident and said that he had ordered a Classic Angus Cheese burger from the outlet at Yuan Ching Road on Apr 8 at about 6.25pm.

"When I received my burger and started eating it, I noticed plastic inside the burger," he said.

"I informed the outlet's staff who gave me a refund and provided me with a new burger."

"However, nobody apologised to me."

Christopher said following the incident, he vomited and had diarrhea.

He subsequently visited a doctor at Jurong Polyclinic and was given a two-day medical certificate (MC).

In response to a Stomp media query, a McDonald's spokesman said that they are aware of the incident and are currently in contact with Christopher.

"Upon being alerted, our quality assurance team took immediate action with further investigation," the spokesman said.

"We would like to assure all our customers that we are 100 per cent committed to serving safe and quality food at all times."