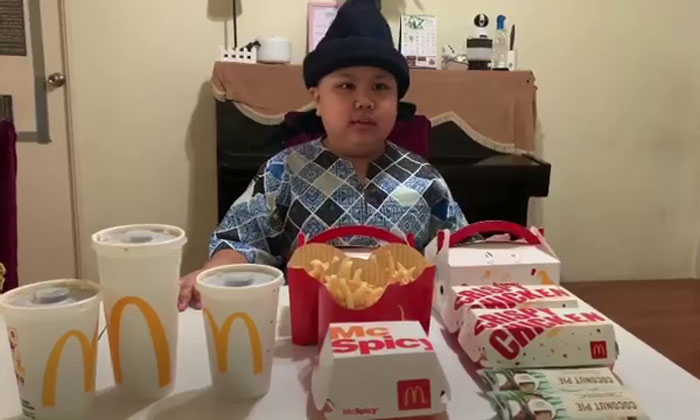 Fast food chain McDonald's made Hari Raya extra special for one of its biggest fans after Stomp reported on a touching video of him getting emotional when surprised with his favourite meal.

The video of nine-year-old Adam Bin Mohammad Irwan bursting into tears when his mother bought him a McDonald's meal after the chain re-opened following a three-week closure touched the hearts of netizens all over the world with his big reaction and genuine tears of joy.

Adam's mother Madam Wati had told Stomp the reason for his "overreaction" was because he has mild autism and sensory issues.

On Hari Raya (May 24), Adam and his family received another special delivery from the manager of McDonald's Pioneer Mall outlet Mr Alan.

"We were all sitting around when the surprise came.

"Adam was happy and shocked but thankful.

"I gave a Happy Sharing Box and McSpicy to my neighbour to spread the love."

Madam Wati added the family is still shocked at how the original video has gone viral.

"I just want to say thank you to McDonald's for the Hari Raya feast and thank you to those who have reached out to me on social media with kind words," she said.

"One guy even private messaged me on Instagram that he wanted to send over a box of 20 pieces of nuggets to us but I turned him down.

"We all feel very blessed."

Madam Wati has since started a YouTube channel for Adam in an efford to "spread love and not hate".