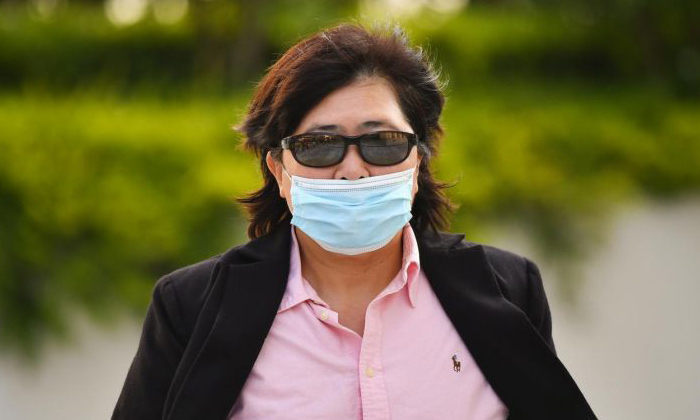 A woman who was caught on video refusing to wear a mask at Marina Bay Sands (MBS) integrated resort was handed 14 more charges on Tuesday (July 6).

They comprise 10 counts of failing to wear a mask at public places and four charges for breaching her 14-day stay-home notice (SHN) last year.

The 53-year-old was earlier charged for various offences, including for failing to wear a mask outside the State Courts.

Phoon allegedly failed to wear a mask over her nose and mouth “at all times” at Newton hawker centre between 7.20pm and 8pm on May 8 last year.

She is also said to have not worn a mask in places such as MBS and Tiong Bahru Market in numerous instances between May 8 last year and May 24 this year.

She is also accused of breaching her SHN at MBS that she was required to serve between June 28 and July 12 last year on five occasions.

Phoon allegedly left her room twice on July 8, and once each on June 28, July 5 and July 9.

Requesting for Phoon's bail to be increased on Tuesday, the prosecution said she had failed to reply to calls and an e-mail by the Immigration and Checkpoints Authority (ICA) requesting for her to assist in investigations.

She had also refused to speak to an ICA officer who approached her before the court hearing.

The court also heard that she is being investigated for an offence she allegedly committed after her previous appearance in court on June 15 this year.

She is required to comply with Covid-19 measures, which is a condition for her to be released on bail, but allegedly failed to do so.

Phoon, who was unrepresented, replied that she would have responded to ICA's request if the agency had sent her a written letter or registered mail to her residence.

She said she had not given her e-mail address to any ICA officer, and did not speak to the ICA officer outside the courtroom, as he was "very aggressive".

Phoon also urged the prosecution to drop the new charges against her, saying that she suffered from eczema and sometimes breathlessness, which were reasons for her not to wear a mask.

Phoon made headlines in May this year after she was caught on video without a mask on and arguing with a safe distancing ambassador.

In the video clip, which went viral online, she questioned the safe distancing ambassador on whether she had a badge and who she represented.

Phoon asked: "If you have no badge, why are you asking me to do something? Who are you representing?"

When the safe distancing ambassador said she represented MBS, Phoon replied: "That's what you say, I can say that I'm a police (officer)."

In the rest of the clip, the safe distancing ambassador tried to get Phoon to put on a mask, but to no avail.