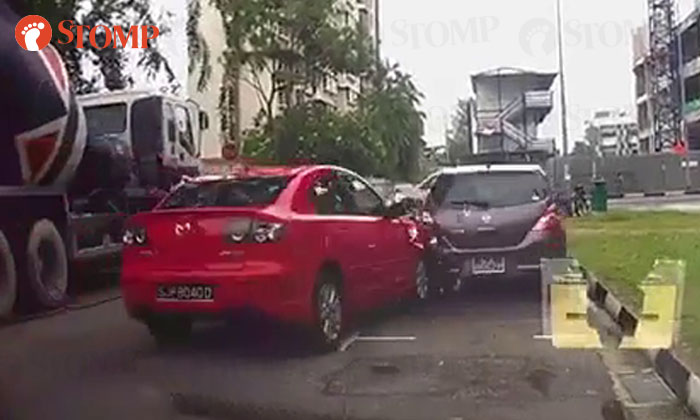 A Mazda driver was caught on video ramming into two cars parked along the side of Geylang Lorong 14 on Tuesday (Sep 4) at about 3.08pm.

Facebook user Ken Leo, the owner of one of the damaged cars, posted about what happened on his Facebook page.

Stomp reached out to him and he recounted the incident.

"I parked my car along Geylang Lorong 14 and headed for my appointment at 2pm," he said.

"When I came back to my car at about 3.30pm, I found that three cars were involved in an accident, including mine.

"I called the police and according to my video and after talking to some witnesses, the driver of the red car left his car there and left."

In videos Ken shared with Stomp, the red Mazda is seen scraping along the side of Ken's silver Honda Shuttle before crashing into a Nissan Latio parked in front.

(Stomp combined the three videos into one below)

The side of Ken's car and the rear of the Nissan Latio were badly damaged and scratched. 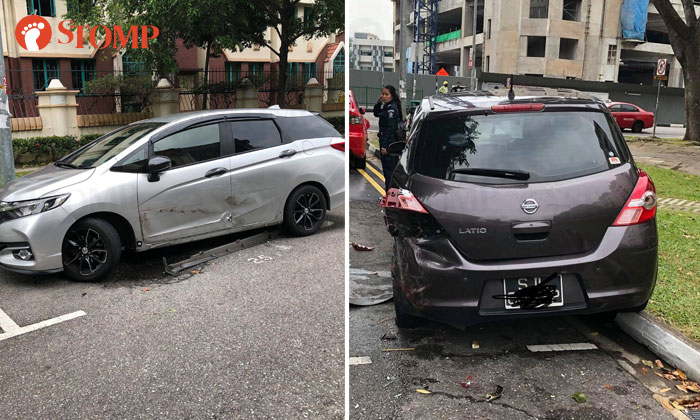 The front right side of the Mazda was damaged as well and the metal looked like it had crumpled from the impact. 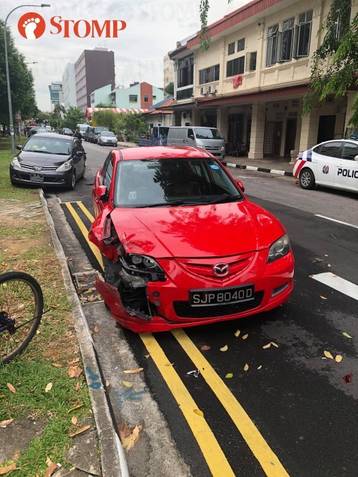 According to Ken, his car is still waiting to be repaired at a workshop.

"Now the workshop also cannot start repairing my car as the red car driver has not been found," he said.

In response to a Stomp media query, the police confirmed a report was lodged and investigations are ongoing.

Related Stories
Rider suffers multiple injuries after getting knocked off bike and run over by MINI on CTE
Rider, 22, taken to hospital after his motorcycle ends up under bus in accident at Jurong Town Hall Rd
Lorry driver and passenger taken to hospital after accident with tipper truck at Jalan Ahmad Ibrahim
More About:
Accidents
damaged
car crash