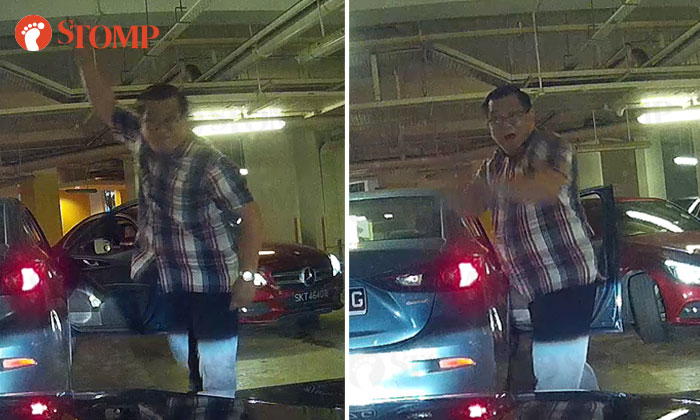 Stomper Michael and his wife were both shaken by an unpleasant encounter with the driver of a Blue Mazda 3 in the basement carpark of the Rio Vista condominium at Upper Serangoon View on Nov 30 at about 6.34pm.

In a video submitted by the Stomper, the Mazda driver of licence plate number SKX7647G is seen exiting his vehicle to confront Michael for sounding his horn at him.

"He had suddenly stopped his car in the middle of the driveway leading to our residents' carpark and when I honked once at him, he immediately came out from his vehicle, shouted and became violent," said Michael.

In the video, the man is seen gesturing at Michael with his right hand before walking over to his vehicle.

A loud thud is heard before the man then allegedly attempts to open the Stomper's door.

He is then heard asking Michael why he sounded his horn at him.

"Luckily my door was locked, otherwise this violent driver would have punched me and God knows what would have happened to me," Michael told Stomp.

"Mind you, my wife was shocked by his improper behaviour and how he didn't even want to apologise but turned so violent at this incident."

The man then walks away but turns back to gesture wildly again before getting back into his car. It is unclear what he said.

Michael said he later got the condo's security to help him stop the man, whom he believes to be a private-hire driver because of a decal displayed on the Mazda's back windscreen, at the exit.

"When I approached him and asked him why he must behave so violently, he replied and challenged me to report it to the police," he said.

"He didn't even realise he was in the wrong and was unapologetic about the whole incident."

"I think he should be imposed with an immediate suspension for his misconduct and bad behaviour."