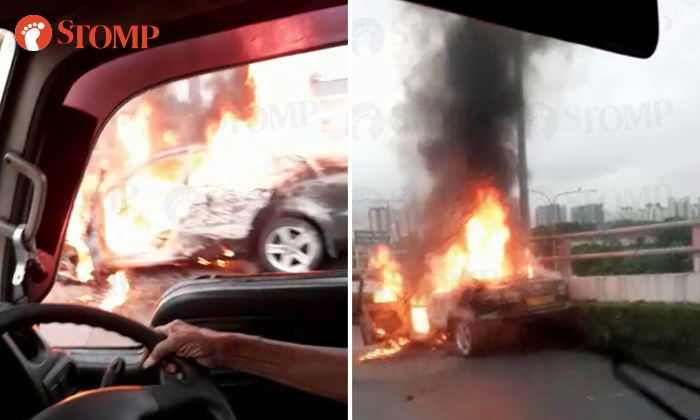 A Mazda driver managed to get out of his car in time before it was engulfed in flames along Tampines Expressway (TPE) on Tuesday evening (Dec 17).

The Stomper was on a lorry and going past the scene of the incident at about 5.30pm.

He took a video of what he saw and told Stomp: "I was travelling towards Sengkang West Way.

"It was raining slightly and my friend, who's driving the lorry, slowed down a bit.

"I saw a car in front of us speeding and then it crashed into the barrier on the side of the road.

"After that I started to see smoke emitting from the car and then there were flames. The fire was rather big."

The Stomper added: "The driver was lucky. He managed to get out of his car in time.

"It's a good thing that traffic wasn't that heavy then but there were vehicles behind us.

"I got off the lorry to approach drivers, asking them to clear a lane for the firefighters.

"I was there for about five to six minutes and only left when I noticed that the fire was getting smaller.

"I've seen plenty of accidents but this is the first time I'm seeing one where a fire has broken out, so I thought I would share this video so people can know about this accident."

In response to Stomp queries, the Singapore Civil Defence Force (SCDF) said: "SCDF responded to a vehicle fire along TPE towards Pan Island Expressway (PIE), near the Seletar West Link at about 5.25pm.

"The fire was extinguished by SCDF using one water jet and there were no reported injuries.