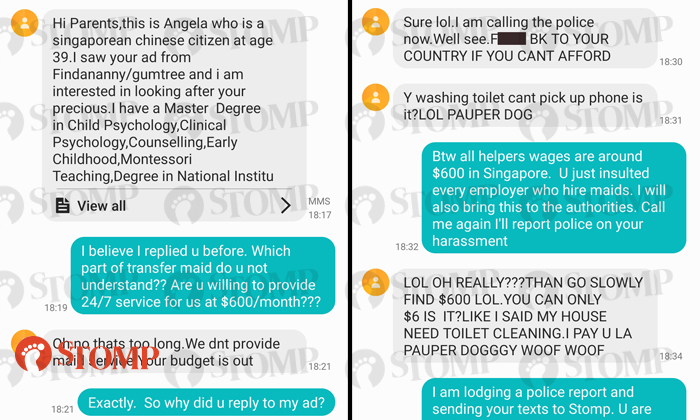 When Stomper Elle placed an advertisement seeking a maid, she probably expected under-qualified applicants like with any other interview process.

However, what she wasn't prepared for was a barrage of verbal abuse from a stranger.

Elle said: "Recently, I placed an advertisement in the 'Find a Nanny' portal looking for transfer helpers (maids who are looking to be transferred from their current employer to another employer).

"Someone called Angela wrote to me offering her services, claiming that she was a certified psychologist and counsellor etc."

In screenshots that Elle sent to Stomp, Angela can be seen expressing interest in the position. She also shared her supposed credentials and said she had a Master's Degree.

Elle told Stomp: "When I replied her and explained the vast differences between a foreign domestic helper (what I am looking for) versus her proposed services, she started to get maniacal.

"She bombarded me with calls and SMSes, calling me all sorts of names from 'poor' to 'pauper' to 'coward'.

"That was shocking, especially coming from someone who calls herself a psychologist/counsellor!"

In the screenshots, Angela can be seen taunting the Stomper for offering only $600 and placing an advertisement despite being 'poor'.

"My house need [sic] toilet cleaner u want come beg me I pay u $1000 LOL," mocked Angela, who later said she would call the police and sue Elle.

Angela also told Elle to 'f*** back to your country' and called her a 'pauper dog'.

Elle told Stomp: "Furthermore, she just discriminated all employers of foreign domestic workers in Singapore, calling all of us cheap and paupers for paying $600 for our maids.

"I have lodged a police report against her harassment and discrimination."