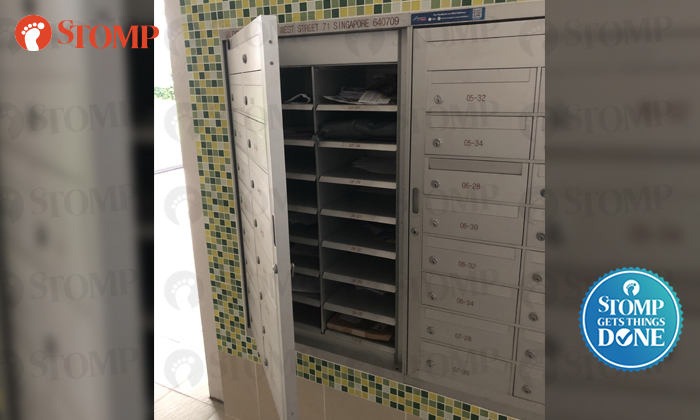 A letterbox at Block 709 Jurong West Street 71 had its masterdoor left open due to a latch that had come loose, SingPost told Stomp in response to queries.

Stomper Prameela, a resident at the block, noticed the open masterdoor on Nov 1 at around 6pm.

She felt upset as her unit's letterbox was one of those affected and said: "Who is to be held responsible if mail is lost?"

According to the Prameela, she informed SingPost of the issue on the same day at around 8pm.

Responding to queries, a spokesman for SingPost told Stomp on Thursday (Nov 8): "We thank Stomper Prameela for alerting us to the open masterdoor.

"Upon learning about the situation, our Inspector of Post was sent to rectify the matter.

"It was only then when we discovered that the masterdoor latch had come loose, which led to it not shutting properly.

"The Inspector of Post proceeded to tighten the mechanism and lock up the masterdoor.

"Our postman will be keeping a closer watch on the wear-and-tear of these letterboxes and we are working with the respective town council to ensure the maintenance of the infrastructure."