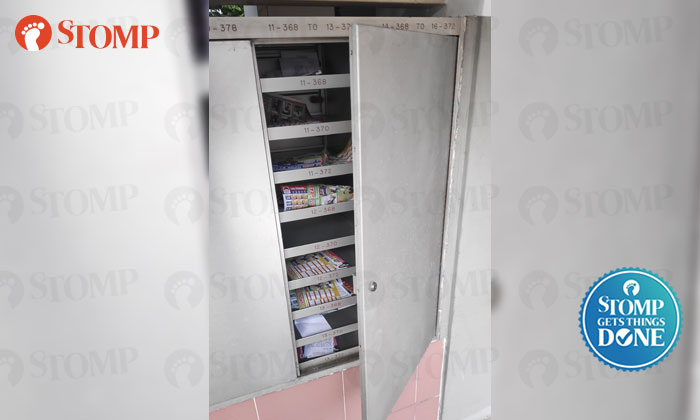 The masterdoor of letterboxes at Block 288B Jurong East Street 21 was left open overnight due to a faulty locking mechanism, SingPost told Stomp in response to a query.

Stomper Ridhwan, a resident of the block, noticed the masterdoor was open when he returned home from work on Monday (Mar 25) at about 5.30pm.

Concerned because his letterbox was one of the affected ones, he told Stomp that he emailed SingPost about the matter.

However, he was surprised that the letterboxes were still open when he went off to work the next morning at about 6am.

"This is unacceptable and irresponsible," he said.

"Important mail with information of the residents were left exposed."

In response to a Stomp media query, a SingPost spokesman told Stomp on Tuesday (Mar 26): "After being alerted to the incident, a staff member was immediately despatched to the block, where he found that the locking mechanism of the door was faulty.

"The lock has since been repaired, and the mailboxes have been secured immediately.

"We would like to assure the public that mailbox security is a key area we are addressing, as part of our operational review.

"We urge residents to call our hotline at 1605 whenever they spot such incidents, so that we can take timely action."

Related Stories
Disciplinary action, extra supervision and training for postman who left Canberra Street letterboxes open
UPDATE: Postman arrested after unopened letters found dumped in bin at Ang Mo Kio, says SingPost
Here's why you should check all addresses on your mail before posting them
More About:
SingPost
letterbox
Stomp gets things done