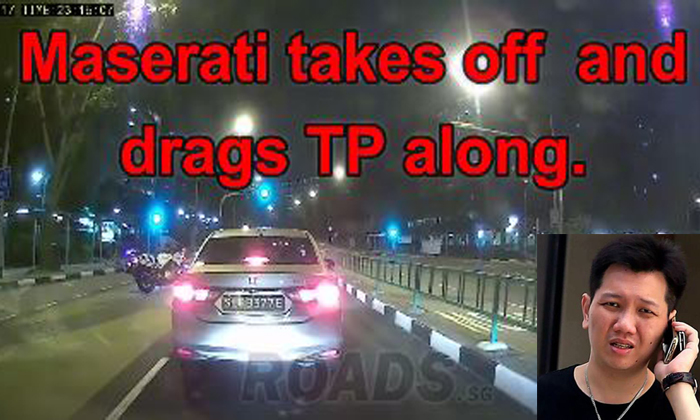 Another video taken from a vehicle camera shows what happened when Maserati driver Lee Cheng Yan, 33, hit and dragged a traffic police officer along Bedok Reservoir Road before speeding away.

The video, posted on ROADS.sg, shows the moment when the traffic police (TP) officer stopped the Maserati driver for an enforcement check. The driver then sped off, dragging the TP officer along with him, according to a caption on the video.

After about 100 meters, the TP officer can be seen lying near the road divider as he is assisted by fellow motorists.

The TP officer sustained multiple injuries and was conveyed to Changi General Hospital for treatment.

The 34-year-old had already racked up several traffic offences prior to the incident.

In July 2017, Lee was fined $13,500 for an illegal modification on his Maserati - installing an altered exhaust system on it - and also causing an accident at Orchard Road in 2016, which saw a motorcyclist being injured.

Lee has been caught a total of eight times between May 2013 and November 2015 for usage of the altered car.

He was charged in court for a rash act causing grievous hurt.on Saturday (Nov 18) morning.