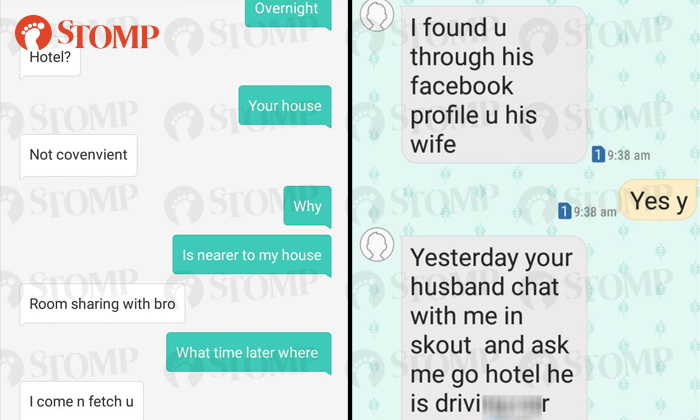 A man struck up a conversation with Stomper R on dating app Skout -- only for the latter to discover some very interesting details indeed.

R told Stomp that she had decided to look up the man on Facebook out of curiosity and managed to find his profile.

She said: "I found out that he was married and with kids. His Facebook photo also linked me to his wife's profile.

"The 'best' thing was his wife had just given birth to a three-month-old baby.

"I started chatting with him. He asked me if I was single and if I had a boyfriend.

"He is always active on Skout, even when his wife was in the first trimester of pregnancy."

Screenshots that R shared with Stomp show how she and the man had arranged to meet, with him suggesting a hotel as the venue.

When R suggested meeting at his house, he replied that it was "not convenient" because he was "room-sharing" with a "bro".

The Stomper continued: "I have a prepaid card and decided to play along with him.

"After arranging to meet, I went to the 7-Eleven in Kovan with my friend to witness what kind of jerk he is.

"We both played him out and saw his car circling round and round Upper Serangoon Road.

"How can a guy with a family go around asking girls to visit a hotel and say such inappropriate things? His wife has just gave birth and yet he is flirting outside.

"It's such a disgrace to have a father like that. Luckily, his kids are still young."

Stomper R later messaged the man's wife to inform her about his actions, but said she is unable to recall how the wife responded.

Browse the conversation R had with both the man and his wife in the gallery above.

Related Stories
Singapore 'photographer' asks Malaysian cosplayer to pose with sex toys, tells her he wants to 'taste her body'
Stranger asks to meet students privately after claiming he got their numbers from Sammyboy
Cheating husband texts married woman -- but did not expect her response
More About:
text
inappropriate
dating
dating app