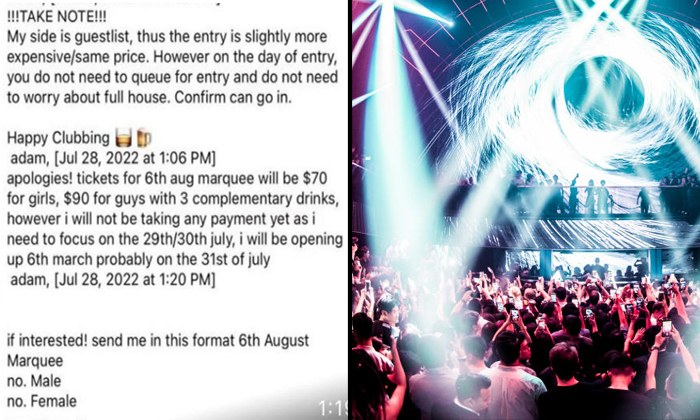 An 18-year-old man who duped a victim into paying $1,020 for bogus tickets to Marquee Singapore nightclub was charged in court with one count of cheating on Friday (Aug 12).

Alden Christopher Tan Choon Siang is said to have cheated the victim into believing that he had genuine tickets to the nightclub and received $1,020 as advance payment from her on July 29, court documents stated.

Tan is believed to be linked to more than 30 counts of e-commerce scams involving some $8,500, said the police in a statement on Thursday.

He was offered bail of $15,000 and will return to court next month as investigations are being carried out.

The police said that they received information about a scam involving the sale of bogus tickets to the nightclub on Telegram.

Posts were made on a Telegram group chat known as SG Clubbing, which advertised the sale of Marquee Singapore tickets for various events that were sold out on the club's official website, said the police.

A screenshot of Tan's Telegram posts showed that he advertised tickets to the nightclub for an event on Aug 6 at around market rate, but told potential buyers that they would not need to queue for entry.

The date coincided with  an event at Marquee hosted by K-Pop star Jackson Wang which was sold out in a day. Tickets of that event were priced from $60 to $200, according to Marquee’s website. Prices of Marquee tickets usually start at $40, depending on the programme.

Officers from the Commercial Affairs Department established Tan's identity and arrested him on Wednesday.

Members of the public are urged to be careful when making online purchases, especially if the price is too good to be true, said the police.

Shoppers should buy from only authorised sellers or reputable sources and avoid making advance payments or direct bank transfers to the sellers.

When purchasing tickets online, use payment options that protect buyers by releasing payment to the seller only upon delivery, said the police.

For each count of cheating, Tan faces up to 10 years in jail and a fine.

In June, the police issued an alert on a similar scam involving bogus Zouk tickets being sold on Telegram chat groups, with victims losing more than $2,300 since May.

At least 10 police reports  related to the scam were made then.

Scammers would post advertisements  on Telegram chat groups such as SG Clubbing, said the police. The fraudsters would then ask victims to make advance payments for the tickets and then become uncontactable.