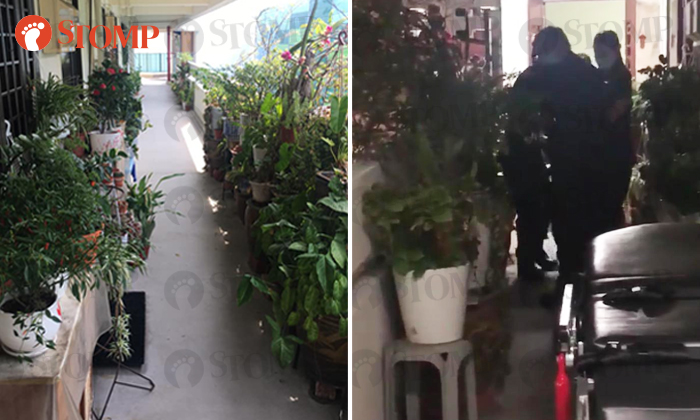 A resident at Block 58 Marine Terrace has transformed the common corridor on the fourth floor into a mini forest -- much to the exasperation of her neighbours.

Stomper Yeo said her grandmother is one of the neighbours who are inconvenienced by the situation, which has been ongoing since 2013.

She also alerted Stomp to photos of the clutter posted by Facebook user Jonse Boh, showing both sides of the corridor lined with potted plants.

The images include those of Yeo's and Boh's 93-year-old grandmother, who can be seen brushing against the plants while seated on a wheelchair.

In his Facebook post on Sunday (Aug 4), Boh said that some of the plants are at "eye level" and block even his own doorstep.

He wrote: "Last week, my grandma got bitten by some insects and had a fever resulting in a fall."

Stomper Yeo also shared a video showing paramedics moving her grandmother from her unit to a stretcher along the corridor on Aug 4, at around 11pm.

In the video, the paramedics can be seen inching along in the narrow walkway while carrying the elderly woman, who was having a high fever.

The Singapore Civil Defence Force confirmed with Stomp that it received a call for assistance and conveyed one person to Changi General Hospital.

According to SCDF guidelines: 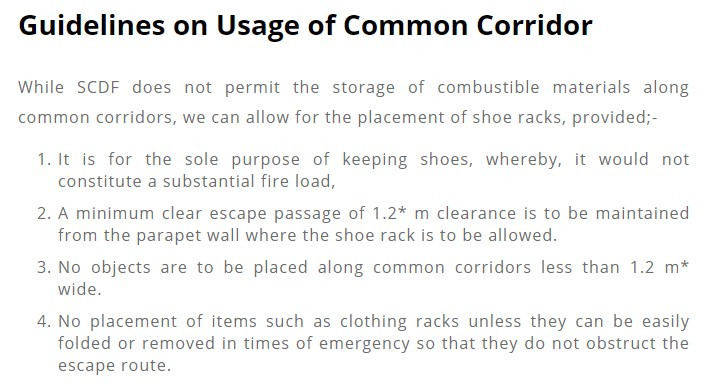 Stomper Yeo said: "None of the plants belong to us.

"Not enough enforcement action has been taken over the years. Letters were issued to our neighbour but no fine was given.

"The neighbour simply moved the plants in a bit but a few days later, things would be back to square one and the plants would be in the same position again."

Boh also added in his post: "We are here trying to make peace. We have spoken to her countless of times [but] what we have in return [is the] door slammed at our face."

In response to a Stomp query, a spokesman for Marine Parade Town Council said it has been engaging with the neighbour on the matter.

The spokesman said in a statement: "The Town Council is aware of the issued raised by the family and has been engaging both units on this matter.

"Our officers have been engaging his neighbour to reduce their potted plants on several occasions and some efforts were put in by the neighbour to do so.

"We will continue to engage their neighbour to further reduce the potted plants along the corridor."