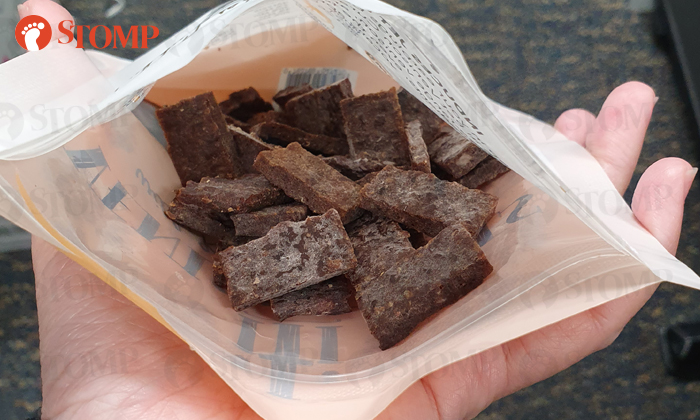 Submitted by Stomper An

Pet food manufacturer Iti has refuted claims about mould being found on its dog treats after a woman alleged that her dog fell ill after consuming the treats.

She opened the packet of treats on Feb 13. 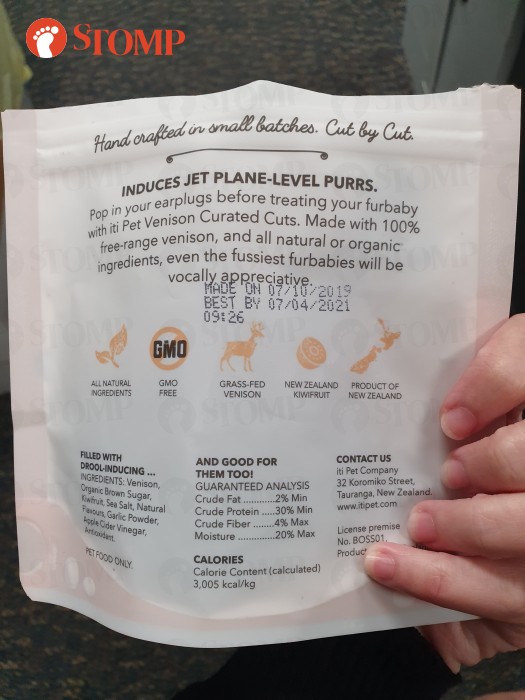 An recounted: "I was disappointed and horrified when I opened the brand new pack and found that all the treats had turned mouldy. Surprisingly, the expiry date was April 7, 2021.

"My dog managed to eat two pieces of the treat while I was opening the packet.

"She had diarrhoea for two consecutive days, poor appetite and experienced fatigue."

An did not bring her dog to the vet, but nursed and hydrated her dog with a clean diet.

She added: "I boiled chicken and rice with soup, and gave her medicine previously prescribed by a vet to stop her diarrhoea."

According to An, she subsequently approached PLC's customer service at Holland Village to inform staff about the incident.

She told Stomp: "When I approached the staff and showed them the treats, they said they would send it to the office to check and let me know of the outcome.

"It took them five days to get back to me and they only offered to exchange another packet for me. They said they would feedback to the supplier but there was no explanation about how the incident occurred.

"I was angry as a dog life is as precious as a human life. I was hurt and worried to see my dog suffer. What if I had not paid attention and my dog continued eating the treats? It could have caused serious issues."

An also expressed her disappointment over the matter and how PLC handled it.

In response to a Stomp query, a PLC spokesman said the product manufacturer provided the following information: "We do not believe that it is mould. We believe it is wicking - white spots are particles of salt.

"This is referred to as 'wicking' or salt surfacing. Wicking is a natural process commonly associated with meat jerky.

"This does not affect the palatability of food safety in any way, and should not to be mistaken for mould. Mould is a fungus that often forms fibrous, threadlike masses on plant or animal materials.

"There is added salt to most of the “iti” food products. Salt is also a preservative as well as improving flavour.

"The salt residue is crystalline, not microbial. Meat also has mineral salts that occur naturally. These are soluble in the oils/juices of the meat.

"As jerky dries, moisture in the meat evaporates, and the salts are no longer dissolved but will be left in the product in a mineral form. The salt then looks to migrate to the surface of the meat in search of water and can form a visible deposit on the surface of the jerky.

"The deposit can feel and/or look like a fine white powder. It is perfectly safe for pets to eat. It can be brushed off the product or rinsed off under water for a few seconds.

"Salt surfacing or wicking does not necessarily occur due to an excessive amount of added salt. Salt can surface on jerky samples in which no salt has been added due to the naturally occurring mineral salts."