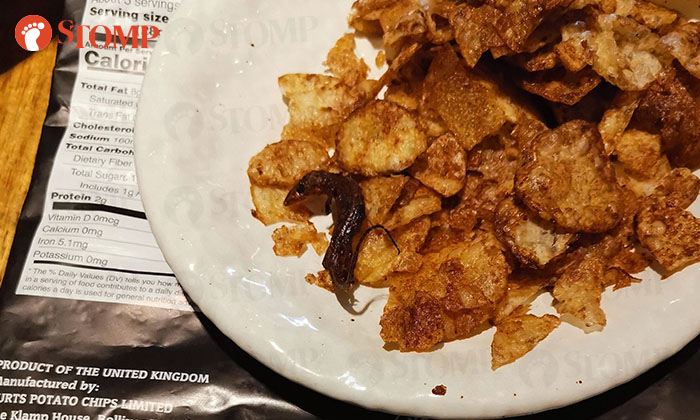 Burts Snacks Limited, the manufacturer of Guinness chips, is investigating an incident where a "fried lizard" was allegedly found in a bag of chips.

Stomper Yapster was eating a bag of Guinness potato chips with his children on Sunday (Aug 18) at about 10am when they came across a "black chip".

He told Stomp: "We were almost finishing the bag when we decided to pour the remaining into the bowl.

"We noticed a 'black chip' but realised it looked more like a fried lizard. I felt so disgusted. Moreover, these are my favourite chips!"

Yapster contributed photos of the foreign object with the chips.

In response to a Stomp query, a Singapore Food Agency (SFA) spokesman said: "SFA is following up with the importer on this matter.

"The industry should ensure that the food products they produce and import meet SFA’s requirements and food safety standards."

Yapster told Stomp that Burts Snacks Limited had contacted him about the incident on Friday (Aug 23).

A spokesman from Burts Snacks told Yapster: "We are currently waiting to receive the foreign object from our distributor. We will then send this for a lab analysis.

Responding to a Stomp query, a Burst Snacks spokesman said: "We were both shocked and concerned when the consumer contacted us about the foreign object in his packet of crisps.

"We are taking the matter extremely seriously and apologise for any distress this may have caused.

"We are in contact with the consumer and have now received the object from our distributor, and are sending off for further investigations.

"We are committed to providing our customers with product that is of the highest quality and as a result have taken immediate steps to address this issue."