Man's GrabFood order gets cancelled after 1 hour, rider makes special effort to 'tabao' food for him 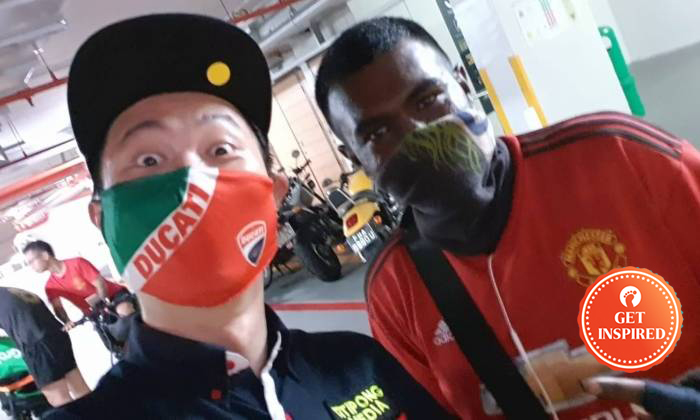 It is without a doubt that many food deliverymen go above and beyond to get food to our doorstep.

So it is not unusual for frequent GrabFood customer, Joshua, to meet kind deliverymen who go the extra mile to hand him his food.

But, according to Joshua, none of those encounters held a candle to what happened with a GrabFood rider named Mani.

Joshua shared on Facebook that he had ordered McDonald's via GrabFood on Dec 2 at 10.52pm.

"The food was supposed to arrive at about 11pm plus since the distance isn't that far away. But I kept waiting and waiting and food never came," Joshua said on Facebook.

"I checked the app and turns out the rider had already picked up my order. So I told myself to be patient and wait for it."

After waiting for more than an hour, he realised his rider had been re-assigned and the new rider was Mani.

He messaged Mani, who shared that first deliveryman had picked up Joshua's order from McDonald's without delivering it.

Joshua told Stomp: "At that point I was hungry and angry. I was 'hangry'. But I also told myself not to be too pissed off with the first deliveryman who went MIA.

"I was hoping that maybe McDonald's would prepare a new set for me, but Mani told me they were closed for the night already.

"I wanted to just forget it but I was too hungry. So I tried my luck and asked Mani if he could 'tabao' some food for me."

Joshua : Bro, actually I'm super hungry as I have not 'makan' since the start of the day. Do you think it is possible to help me get some food and deliver it to the same location? I can pay you a little more.

Mani: Can bro, what do you feel like eating?

Joshua : I am not sure what this area has, so any food is fine.

Mani: There's Kopitiam here and the 'Zhi Char' stall is still open. Do you want anything from here?

Joshua : Oh ok, maybe just a packet of hor fun and a can of coke?

Mani: Alright bro, you text me via the Grab app.

But just after Joshua hung up, he realised that the Grab app had cancelled his order.

That meant that the chat with Mani was closed, and the duo had no means of contact as they had yet to exchange phone numbers.

Joshua told Stomp that he was so hungry at that point that he just made a separate GrabFood order for a packet of hor fun.

"Since the chat was closed, I didn't think Mani would show up with my food since we had no way to contact each other. So I just ordered food via Grab again," Joshua said.

"I was in the office this whole time, which is located on level five of an industrial building. I was about to collect my new Grab order when I saw a man walk out of the lift. He seemed lost but he was holding a bag of food.

"I called out to him, thinking he was the new deliveryman about to deliver my hor fun. But guess what, it was Mani! He arrived before my second order did!

"I was so shocked and super appreciative. I can't believe he really 'tabao' food for me, even though our Grab chat was already closed.

"I thanked him and gave him a tip. I ate the packet of hor fun he brought me and when my second order of hor fun arrived, I gave it to my friend at the office.

"I feel so lucky that Mani did this for me and now, we are friends. It makes me happy to know that there are still good people in this world."

Related Stories
'Ms Ziyi' surprises GrabFood deliverywoman with bouquet of flowers, fries and tip
Yishun resident opens up his home to all delivery riders in need of rest or shelter from rain
Stomper inspired by GrabFood rider who continues to make deliveries despite losing leg in road accident
More About:
kind
heartwarming
get inspired
inspiring
GrabFood
food delivery