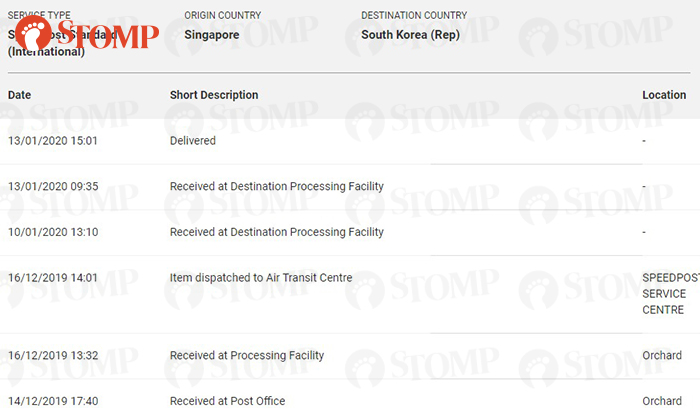 A man's Christmas present to his brother became a Lunar New Year present after his delivery was delayed.

Stomper Ma sent a Christmas parcel on Dec 14 last year to his brother in South Korea.

He opted for SingPost's Speedpost Standard (International) Service and it had cost him $60.

He shared a screenshot of the tracking information.

On Dec 16, 2019, the parcel was dispatched to an air transit centre. Three days later on the 19th, Ma contacted SingPost as there wasn't any status update.

A customer service officer confirmed with him that the parcel had already left Singapore.

On Dec 22, the Stomper was informed by SingPost that the parcel would be delivered within the expected delivery time, where he understood that his brother would receive it latest by Christmas.

According to SpeedPost's website, it would have taken about six to eight working days for the parcel to be delivered to Ma's brother in South Korea.

However, Ma received an SMS from SingPost on Dec 28 that investigations were ongoing and they would update him in seven working days.

When 2020 rolled around, SingPost informed Ma on Jan 8 that they were waiting for a reply from Korea Post and they would update him in three to four working days.

Ma told Stomp: "On Jan 10, there was finally the first update on Korea Post's website that the parcel has arrived in South Korea's transit post office.

"The parcel was finally delivered on Jan 13, one month after the date I posted it.

"Would you find it bizarre if your Lunar New Year present came in a Christmas gift wrapper?"

Responding to a Stomp query, a SingPost spokesperson said: “The months of November and December constitute a peak period for SingPost as well as many postal and courier agencies worldwide.

"This is due to year-end festivities and eCommerce sales seasons. As such, we had from  Nov 1, 2019 notified all customers through the Speedpost website that deliveries could face delays due to high parcel volumes.

"When Mr Ma lodged his parcel with us on Dec 14, 2019, we immediately commenced arrangements to ship the parcel to Korea Post, our service partner in South Korea.

"Based on our records, the parcel arrived in South Korea via air freight on Dec 16, 2019.

"However, Korea Post said they were not able to process the parcel due to high delivery volumes on their end.

"They were only able to process Mr Ma’s parcel on Jan 10, 2020, and it was successfully delivered to its recipient three days later.

"During this time, our customer service officers responded to all 14 calls and emails from Mr Ma enquiring about the status of his parcel.

"As a gesture of goodwill, we will be refunding Mr Ma’s postage fee of $60, and have apologized to him for the delay and the inconvenience caused.”