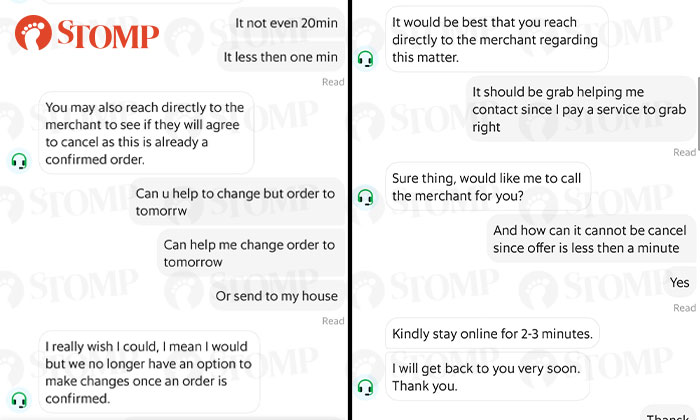 A Stomper placed an order of 30 curry puffs from Old Chang Kee to be sent to his office on Monday (Sept 26).

However, within a minute of placing the order he realised he keyed in the wrong date (Sept 25).

Stomper Jason told Stomp that he contacted GrabFood immediately requesting to change the date or cancel the order but was met with inflexibility from the customer service representative.

In screenshots of his chat, he was told that the option to cancel an order is available up to 20 minutes after ordering.

However, Jason did not have this option despite realising his mistake within a minute.

Grab then asked him to contact the merchant directly.

Only when he pressed that Grab should be helping him, they agreed to call Old Chang Kee.

Unfortunately, he was told that it was too late to cancel as his order was already being prepared.

He then asked if it was possible to get the curry puffs to be sent to his home address instead as no one would be at the office to receive it but he was told that he would have to communicate any change of address to the driver.

Not impressed by Grab's service, Jason told them to ask the driver to throw the curry puffs away.

"Eventually, I gave the food to the delivery driver because GrabFood is so inflexible," he said.

Related Stories
Man waits 2 hours for GrabFood order to arrive only for it to get cancelled
Customer has frustrating convo with Foodpanda agent after getting wrong Domino's pizza order
GrabFood rider delivers meal to wrong address but when customer finally gets it, it's not what she ordered
More About:
grab
GrabFood
bad service