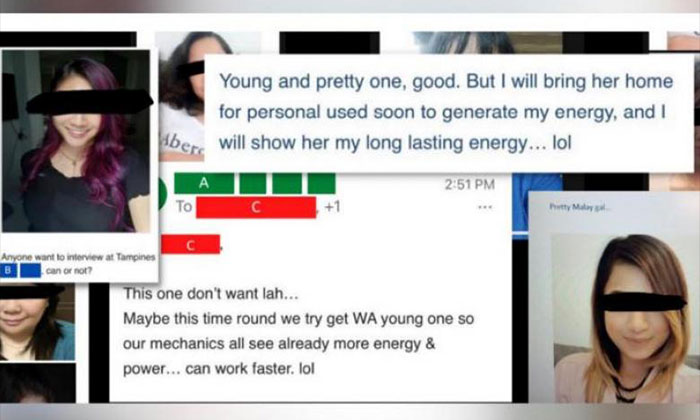 A whistleblower has leaked on social media explicit e-mails sent by workshop managers at car rental firm Ethoz Group - exchanges which may be in contravention of regulations on employment practices.

The e-mails contain sexual innuendos about women who had applied for jobs at the firm. Some of the exchanges also included photos of the prospective candidates.

In one e-mail, the writer said: "Young and pretty one, good. But I will bring her home for personal use soon to generate my energy, and I will show her my long lasting energy."

Another said in a different e-mail thread: "If not... can consider to bring her (potential girlfriend) home for his private use."

It is not known when these e-mails were sent.

Screengrabs of eight e-mails were posted online on Monday (Feb 7), five of them with photos of the job candidates.

In one e-mail, the writer described one candidate, whose photo was attached, as "massage girl".

The workshop is located in Tampines.

Ms Cindy Oh, chief executive of Ethoz Group, told The Straits Times: "We take the issue very seriously and will not condone such behaviour in our workplace."

She said the screengrabs appear to have been taken by former employees who used to work at the workshops.

Ms Amarjit Kaur, a partner at law firm Withers KhattarWong who specialises in employment law, said victims can accuse the workshop managers of harassment and causing alarm or distress.

This could be translated to contraventions under the Protection from Harassment Act (Poha).

Their actions could also be in breach of employment rules.

"Given that these were managers who were assessing candidates with a view towards recruiting them on behalf of the company, the company may be found to have breached the Tripartite Guidelines on Fair Employment Practices for engaging in discriminatory hiring practices on the basis of a candidate's appearance or race," said Ms Kaur.

But she noted that it may be a valid defence if the managers believe the words used by them would not be seen by the victims.

"Given that the comments were made in a 'workshop management' e-mail group in respect of prospective hires who would not have access to the same and were not part of the company, the managers could seek to use this to shield themselves," she noted.

Ms Kaur said the mere fact that the company e-mail was used will not automatically make the company responsible for the managers' actions.

However, she added that the women can try to seek legal redress and obtain monetary compensation against the perpetrators for offences under the Poha.

"However, the female candidates will face the obstacle of overcoming the defence the managers are likely to raise, which is that they had no reason to think that the words would be seen by the candidates," she said.

Related Stories
Woman harassed by neighbour who tells her to "suck my c***": Police investigating
Man allegedly harasses woman in Toa Payoh and offers her $2 to wear bikini
Man harassed married woman with lewd and threatening messages after she ended affair
More About:
harassment
sexual harassment