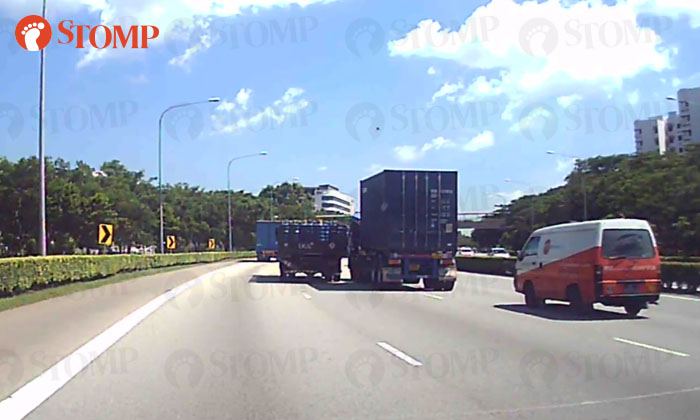 Stomper Syihan was driving along the Bukit Timah Expressway (BKE) and Pan-Island Expressway (PIE) towards Changi at 2.39pm on Thursday (May 24), when he witnessed the drivers of a UGS lorry and a trailer manoeuvring recklessly.

This causes the blue trailer beside it to swerve to the next lane to avoid a collision.

The blue trailer then overtakes the lorry as the latter tried attempts to cut into its lane again.

Syihan said: "The action of both drivers is very dangerous.

"What if there really was an accident?

"There could be a small spark which could have caused an explosion."

Fearing for his own safety, Syihan said he even "slowed down to keep a safe distance, especially from the lorry carrying all the gas cylinders".

Related Stories
Toyota driver shows off "cornering skills" and FAILS miserably
Impatient lorry driver of YP4569U overtakes Stomper while making right turn at Jurong East
Have you ever seen a bus travelling this fast in Singapore?
More About:
dangerous
driving