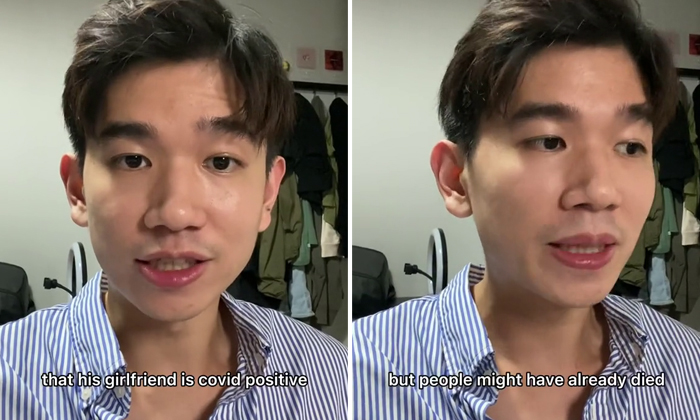 A TikTok user shared his frustration in a video about a friend who came over to another friend’s house during Chinese New Year despite knowing he had been in close contact with a positive Covid-19 case.

In the video posted on Feb 7, Mr Jason Yu, 27, said he and his friends were having a meal at a friend's house when one of them revealed he was in close contact with a positive Covid-19 case.

It seems the man’s girlfriend, whom he was living with, had tested positive for Covid-19.

When the group asked if he had taken any precautions like wearing a mask while interacting with his girlfriend, the man replied that he had not.

He had also not informed anyone in the group of his situation before showing up.

"He didn't tell us about it, because we then would have told him like 'please don't come,'" said Mr Yu.

"Now, I have to worry about self-isolating at home (or else) I'd possibly pass it (the virus) over to my parents and my sister."

On Feb 8, Mr Yu posted another TikTok video stating he wasn't out to "cancel" his friend, but wanted only to emphasise the importance of staying safe.

He urged those who have been in contact with a positive Covid-19 case to stay at home and isolate themselves until they test negative.

"Be responsible... Honestly, you wouldn't know but people might have already died because of you."

The Feb 7 video, which has gotten more than half a million views so far, drew many comments from netizens who lauded Mr Yu for speaking up against his friend, and taking the initiative to self-isolate. 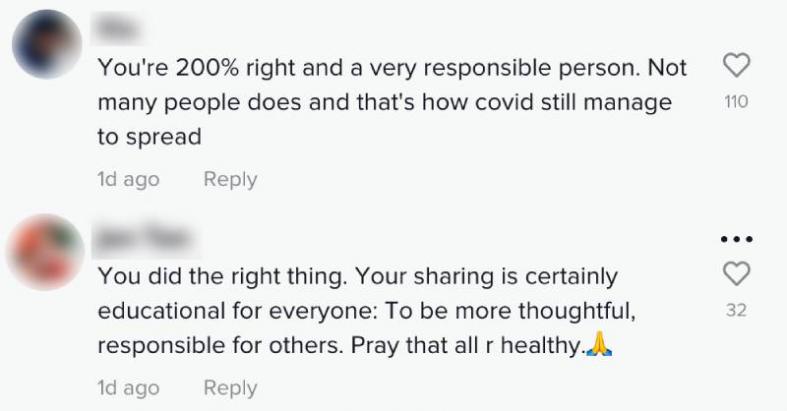 Related Stories
Woman visits grandma with toddler and finds out cousin has Covid-19 after entering home
Don't panic: Why 'Covid-positive' man on MRT isn't breaking rules
What do you do when your 3-year-old gets Covid-19? S'pore dad shares his experience on TikTok
More About:
Covid-19
inconsiderate
TikTok