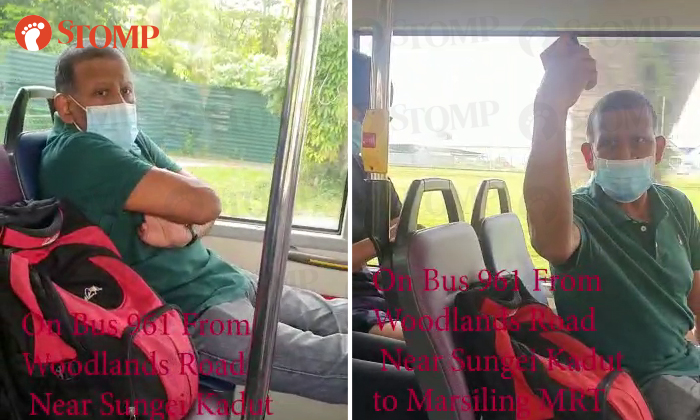 A man scolded a commuter who told him not to rest his feet on a bus seat, citing that he had a 'knee problem'.

Stomper Stephen shared a video of his encounter with the man onboard bus service 961 along Woodlands Road on Saturday (Apr 9), at around 5.40pm.

In the video, the man can be seen with both his legs propped up on the seat in front of him and turning away from Stephen's camera.

Stephen then approached the man and asked him if he had seen the sign telling commuters not to rest their feet on the bus seats.

The man responded, "My knee problem what," to which Stephen replied, "Okay, you tell the doctor."

The man is later heard exclaiming, "People tired, people knee problem, you take picture. Go and take everybody lah, better," and repeating that he has a "knee problem".

Stephen recounted: "This man refused to put his legs down even after I told him to. You can hear me talking to him politely at the start of the video.

"He also said, 'Bus captain also never say anything, you so busybody for what?' I was saddened as he even called me a b*****d, but it was not recorded.

"If signs are put up but not enforced, what is the point?"

Related Stories
Woman shouts at bus captain after being told to wait: 'I don’t need to listen to you!'
Passengers pull down masks to eat ice cream, taunt bus captain: 'Drive carefully can or not?'
Elderly man hurls vulgarities at bus driver for not stopping for him: 'Do you know who am I?'
More About:
dispute
argument
Bus
inconsiderate