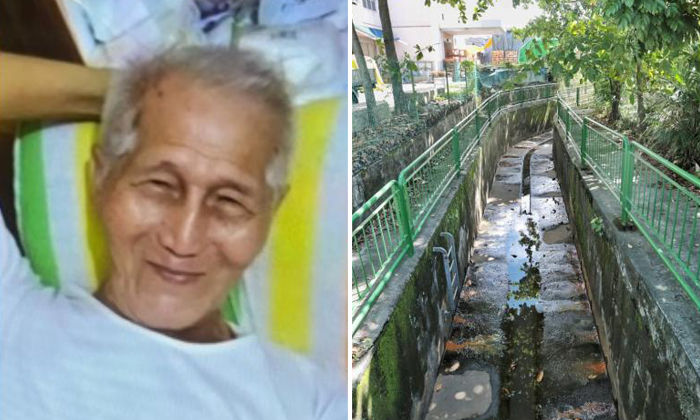 An 80-year-old man, who had dementia and went missing for three days, was found dead in a drain on Monday (Jan 3).

The police sent an appeal for information on Jan 2 on the whereabouts of Mr William Leck Swe Chua, whose body was found in Hougang.

According to Chinese newspaper Shin Min Daily News, this was not the first time he had gone missing.

In response to queries from The Straits Times, the Singapore Civil Defence Force said it received a call for assistance at about 7.10pm on Monday. Its rescuers retrieved the body from a drain near 42 Defu Lane 7.

The police said that he was pronounced dead at scene by a paramedic and that it was a case of unnatural death.

According to Shin Min, Mr Leck lived in Block 313 Hougang Avenue 5, which is about a 20-minute walk from where he was found.

The police had said he was last seen in the vicinity of the block on Dec 31 last year.

Mr Leck's family had appealed through various channels for help to find him. They had also gone to shopping malls around Hougang to search for him, but to no avail.

ST understands that Mr Leck had worked at the St Joseph Dying Aid Association, where his wake is being held.

The association is located in the Church of the Nativity of the Blessed Virgin Mary in Hougang.

ST visited the wake on Wednesday, but the family and a staff member of the association declined to comment.