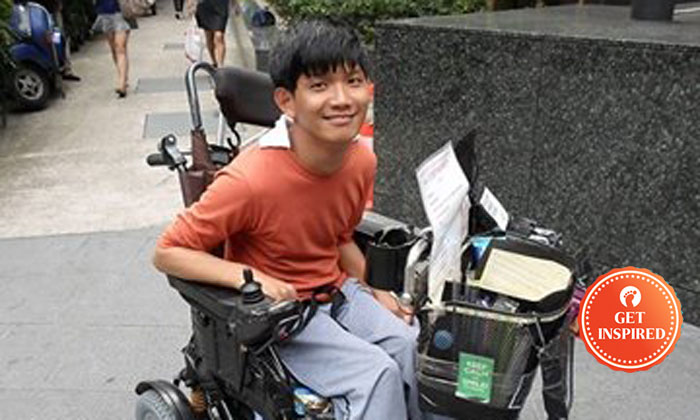 Being born with cerebral palsy, 38-year-old Wesley Wee is unable to control most of the muscles in his body.

Apart from having slurred speech, he is also unable to eat, dress, walk or bathe on his own.

He needs a wheelchair to get around and his fingers are tightly clenched together.

However, this has not stopped him from dedicating the last five years to publishing his own book, "Finding Happiness Against the Odds".

In the day, he goes to Orchard Road to sell tissue paper.

When he returns home at night, he uses his big right toe to type out each and every letter of his book.

Facebook page, Happiness Notebook, interviewed Wesley on his book which will be published later this month.

“With my story, I want to tell others with disability not to give up hope. If I had given up hope, I wouldn't be here today,” he said with the help of his wife.

He had attempted suicide several times during what he described as the lowest points in his life.

He faced abuse from his own family who were embarrassed by his condition.

His mother would hit him and say, "You good for nothing, si geena (dead child in Hokkien), it is better you die."

His father was determined to make him walk and would force him to use a walking frame to make ten rounds around the living room every night.

When he could not complete his exercise, his father would drag him to the bathroom and dunk his head into a pail of water.

Fortunately, he had his grandmother to love and care for him on weekdays and ensured he received an education at the Spastic Children's Association even though his parents thought it would be wasted on him.

Seven years ago, he met the love of his life online.

He used his hard earned money from selling tissue paper to buy phone cards to talk to her every night and eventually went to the Phillippines to find her.

They got married five years ago.

Wesley has big dreams despite earning just $1,000 a month and refusing to apply for government aid.

He wants to run his own shoe business and adopt a child with his wife in the future.

For now, he is focused on publishing his book and inspiring others.

The book launch is at 6pm on Aug 23 at Google Singapore's office, 70 Pasir Panjang Road.

You can buy or donate a book over at http://wesleycan.com/book for $20.

To read the full interview, go to Happiness Notebook.

Related Stories
Disabled son condemned as a baby, but single mum never gave up and got him into Harvard Law School
Disabled sisters in China turned to online businesses to support their mother and themselves
Teens with special needs raise $50k -- with 2 chairs
More About:
cerebral palsy
inspiring
book
get inspired
appeal for donation
donate
disability
disabled