Man with baby crosses road carelessly like he owns it, rages at driver who shook head at him 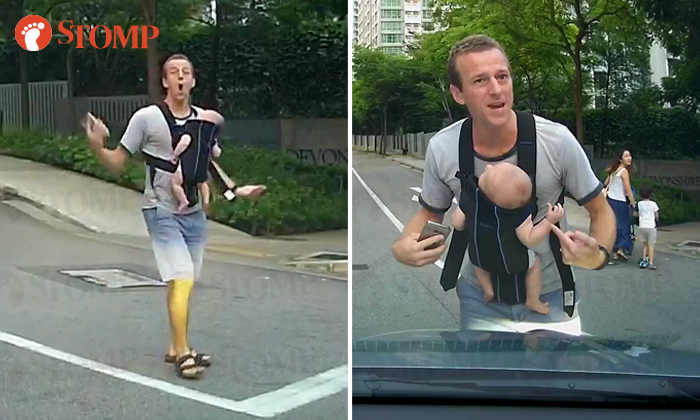 A man who had a baby strapped to him was caught on camera crossing the road in a reckless manner -- then losing his temper at a driver that had stopped to let him pass.

The incident occurred on Aug 19 at around 6.45pm, along St Thomas Walk.

Stomper Amazing, the driver in the incident, sent Stomp a video showing what transpired that evening.

In the footage, the man can be seen crossing the road with a baby strapped to him.

He then gestured for Stomper Amazing to stop, while calling for a woman and a boy on a kid's scooter (presumably his family) who were trailing behind. The woman was pushing a baby stroller.

Said the Stomper in a phone interview, "The man shouted at his wife to the cross the road."

Amazing added that at this point, he shook his head at the man's behaviour -- which the latter saw, hence causing him to flare up.

"I was more than happy to let him pass, but he flew into a rage and blocked my vehicle's passage with the baby strapped to him when I shook my head at his reckless act.

"He kept saying he had the right to cross because he had a baby with him. Does he think his baby is his shield?

"He also came to the driver's side and continued shouting, but I drove off," said Amazing.

According to the Stomper, he only shook his head but did not honk at the man, nor did he engage in an argument by responding.

Stomp understands that in some countries, pedestrians have the right of way on the road.

Related Stories
Jaywalker has the cheek to give 'death stare' and point middle finger after getting honked at
Pedestrian crosses road without checking for traffic, gives driver stink eye for honking at her
Guy crosses lane with eyes glued to phone -- then blocks car's path, shows driver middle finger... and his butt
More About:
road rage
jaywalk
jaywalking
pedestrian
reckless
dangerous
dispute
rude