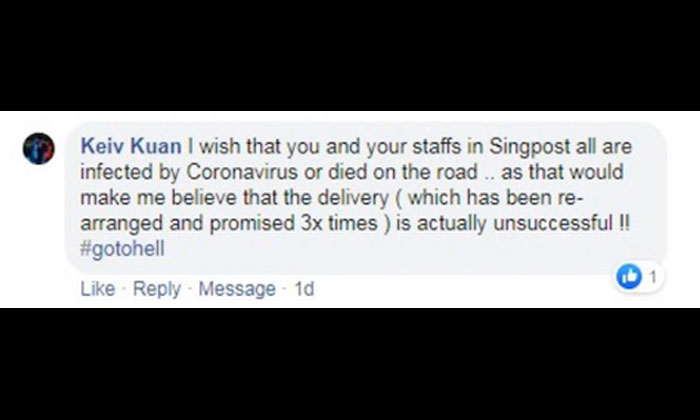 There is no reason to wish illness to workers over a failed parcel delivery but in a fit of anger, one Facebook user did just that.

Keiv Kuan wished death and infection by coronavirus on SingPost staff in a Facebook post after his parcel's delivery was unsuccessful.

Mr Robin Goh, group chief brand and communications officer of SingPost shared Mr Kuan's post on his personal Facebook page with the caption: "And just as you thought you saw the worst in people."

In the comments section of the post, he said that he had responded to Mr Kuan using SingPost's account.

Netizens have praised Mr Goh's sassy response and said the Facebook user had it coming.

In his response, Mr Goh identified himself and said that he had personally investigated Mr Kuan's case "in the hope to understand the wrath behind your condemnation towards all SingPost staff members".

"For the first time, I was truly hoping that my delivery staff made such a grave (yes, pun fully intended) mistake, to perhaps justify such a condemnation; that during this difficult time of an international health crisis, we at SingPost, all deserved to be infected and die. 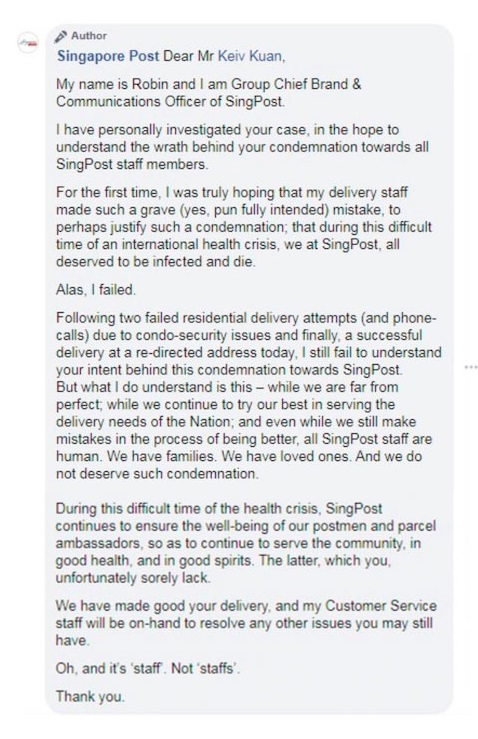 He explained there were two failed residential delivery attempts due to condominium security issues but the parcel was successfully delivered on Tuesday (Feb 11).

"I still fail to understand your intent behind this condemnation towards SingPost," he wrote.

"But what I do understand is this -- while we are far from perfect, while we continue to try our best in serving the delivery needs of the Nation; and even while we still make mistakes in the process of being better, all SingPost staff are human.

"We have families. We have loved ones. And we do not deserve such condemnation."

"During this difficult time of the health crisis, SingPost continues to ensure the well-being of our postmen and parcel ambassadors, so as to continue to serve the community, in good health, and in good spirits.

"The latter, which you, unfortunately, sorely lack.

"We have made good your delivery, and my Customer Service staff will be on-hand to resolve any other issues you may still have.

In response to a Stomp query, a SingPost spokesman confirmed that Mr Keiv Kuan's parcel was successfully delivered at a re-directed address on Tuesday, following two unsuccessful attempts due to condo-security issues.

"SingPost frontline staff interact with members of the public on a regular basis, and instances like this, while uncommon, still cause no small amount of distress and consternation to our personnel," the spokesman said.

"It is our hope that members of the public can refrain from any form of abuse towards our staff, as we continue serving Singapore’s last-mile needs, even in these challenging times.”