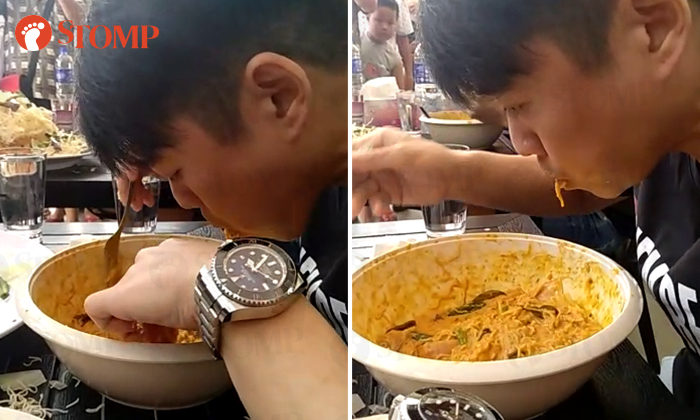 Are you able to finish a bowl of noodles in nine minutes? What about over two kilograms of deep-fried beehoon and a large bowl of chicken curry?

Stomper Jason was at Block 182 Woodlands Street 13 for lunch at about 2pm on Sunday (Nov 10) when he noticed a lot of tables with huge quantities of food being placed outside a coffeeshop.

He contributed videos he took at the coffeeshop and told Stomp: "I was at Food Paradise coffeeshop at about 2pm.

"I was interested when I saw the tables and approached some people to ask what was going on.

"I found out that a food challenge was going to take place and decided to have my lunch there to watch the competition."

In the video, competitors can be seen dipping chunks of deep-fried beehoon into a large bowl of curry before eating it.

Jason added: "I heard from a conversation between a contestant and one of the organisers that they had to pay a registration fee of about $10 to participate in the challenge.

"The food was provided by a 'zi char' stall at the coffee shop.

"The competition ended at about 4pm and I stayed through till the end because I felt a bit kaypoh and wanted to see how the competition was going to be like.

"He finished 2.5kg of deep-fried beehoon and chicken curry within 9.5 minutes." 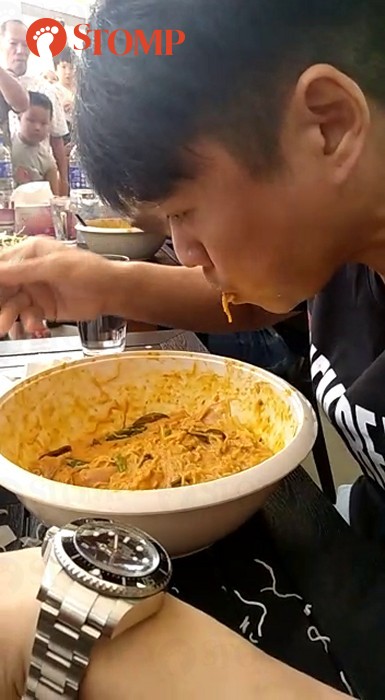 Jason said: "This is a good marketing strategy. What took me by surprise was that no food was wasted.

"The contestants were given time to finish their food and they were also given takeaway boxes so that they could bring the food home.

"I once saw a food competition in person about five years ago. This was in Chinatown and the contestants didn't finish their rice but they were thrown away.

"I feel that organisers who have these food competitions should all do the same thing and be responsible.

"The boss of the 'zi char' stall was very generous.

"Those who throw uneaten and leftover food from these competitions are contributing to food wastage issues.

"There are so many people who are starving and do not have food to eat."