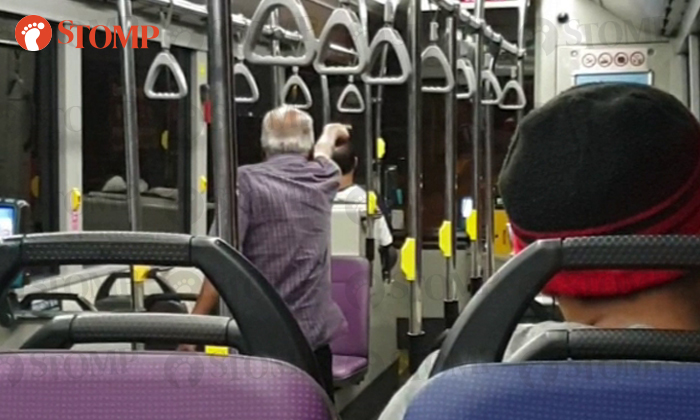 A man went on an expletive-laden rant during a bus ride last Sunday night (Sep 8) for no apparent reason, even wiggling his buttocks at one point.

Stomper Genre, who was travelling on board SMRT bus service 187 at around 10.30pm, witnessed the incident and sent a video to Stomp.

Genre said: "A commuter behaved in an unruly manner and was abusive towards the bus captain without any apparent reason while the bus was in motion.

"The man started his rant from Bukit Panjang and it lasted till the bus reached its destination at Woodlands Bus Interchange.

"He can be seen hurling vulgarities and making inappropriate actions in the bus which could have distracted the bus captain.

"Such actions by the man in the video endanger not only the commuters travelling on the bus, but the safety of other road users too."

In the video, the male commuter can be seen making aggressive remarks and gestures that appear to be directed at the bus driver.

The man repeatedly asked, "You think who you are?" and hurled vulgarities throughout the video.

He also said, "Just show your backside like that" while wiggling his own buttocks.

"All mother sister all sit down," he can be heard saying at the end of the video.

Genre told Stomp: "Luckily, the bus captain remained cool during the entire journey. He chose not to retaliate and safely brought his passengers all the way to their final destination."

Related Stories
Man shouts at bus driver during dispute over payment: "Don't raise your voice at me ah!"
Man goes 'raving mad' after woman asks him to turn down music, both want to Stomp each other
Man hurls vulgarities at guy on bus, challenges him to fight for 'looking' at him at Boon Lay
More About:
dispute
rude
vulgar
Bus