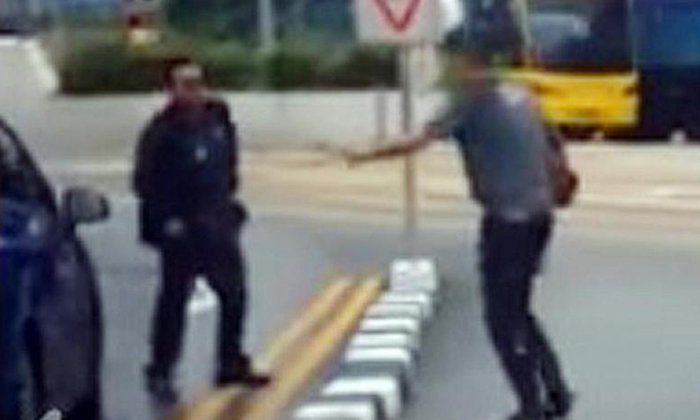 A repeat offender who crashed a stolen car through a barrier at the Woodlands Checkpoint, then brandished a sickle at law enforcement officers, was on Thursday (Oct 3) sentenced to 15 years' preventive detention and the maximum 24 strokes of the cane.

Chew Guan Mong, 45, had pleaded guilty in August to 16 charges for various offences, including armed robbery, possession of methamphetamine, helping to keep ransom monies from a kidnapping plot, and splashing paint outside debtors' flats on behalf of loan sharks.

Another 25 charges were considered during sentencing.

Chew, who was first convicted in 1994 for armed robbery, returned to a life of crime after he was released from prison in 2016 following a 12-year term of corrective training.

His lawyer, Mr Josephus Tan, told the court on Thursday that Chew has "newfound meanings to life" after his wife gave birth to their son in August 2018, while he was remanded in custody for his latest crime spree.

Pleading for compassion, Mr Tan asked for not more than 13 years' preventive detention.

On the afternoon of Jan 5, 2018, Chew drove a rented Toyota Camry along Pan Island Expressway (PIE) towards Tuas.

He swerved in a zig-zag pattern between two lanes and as he approached the exit to Clementi Road, he sideswiped an SMRT bus.

The car veered several times before crashing to a stop near the road shoulder. No one was hurt in the collision.

Chew, who has been banned from driving from 2004 till 2034 for previous offences, then abandoned the car and ran across the centre divider to the opposite side of the expressway.

At the time, he was carrying a bag containing a sickle, a rusty long knife and a bottle of kerosene.

As he neared the end of the slip road merging into Upper Bukit Timah Road, he ran up to a Mazda driven by a 40-year-old woman. Wielding the sickle, he opened the door on the driver's side and shouted at her to get out of the vehicle.

Chew then drove to the Woodlands Checkpoint in her car but entered a lane for motorcycles by mistake and was eventually stuck.

Desperate to escape, he crashed through a traffic control barrier, causing damage amounting to more than $6,500.

He brandished the sickle when officers stationed at the checkpoint approached the car but was eventually subdued.

After his arrest, police searched Chew and the car and found a small packet of methamphetamine, commonly known as Ice, on him.

Separately, Chew also played a role in a kidnapping plot in which he roped in another man to collect $80,000 in ransom from the victim's father in 2017.

The kidnapping victim was a 41-year-old man called Goh Chun Kiat who made plans to illegally flee from Singapore after he was arrested for cheating.

After taking their $1,000 cut from the ransom, Chew and his accomplice passed the remaining $78,000 to a third person.