Man who threatened to "put down" adopted dog: AVS looking into allegations of neglect 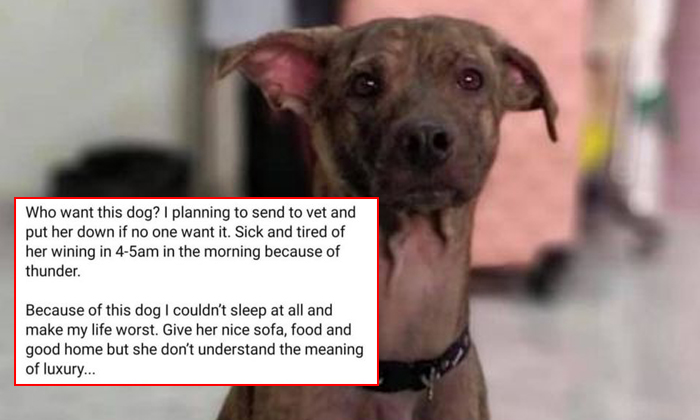 The Animal and Veterinary Service (AVS) is looking into a case where a man had threatened to "put down" his dog following feedback that included allegations of neglect.

The man, who adopted Sofie the mongrel around four years ago, had posted on Facebook on August 23 about rehoming her permanently.

He drew flak when he complained about Sofie in another post two months later and threatened to put her down if no one wanted to adopt her.

The man subsequently apologised and said Sofie has been adopted.

However, the saga appears to have taken yet another twist after a rescuer provided the following update: 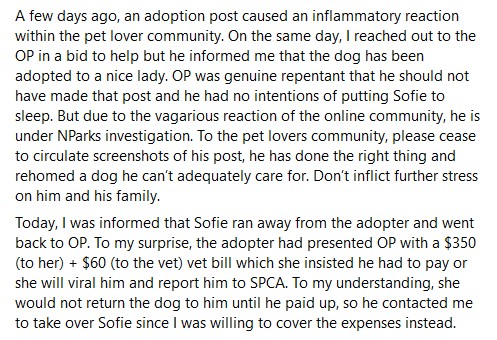 In response to a Stomp query, Ms Jessica Kwok, Group Director of AVS at the National Parks Board (NParks), said it received feedback about a case where a man had threatened to put down his dog if he did not manage to rehome it.

"NParks understands that the dog has since been rehomed," said Ms Kwok in a statement on Wednesday (Nov 4).

"The feedback also alleged that the dog could have been neglected, and we are looking into the case."

Ms Kwok reminded that owning a pet is a lifelong commitment, and owners must be responsible and provide care for the animals.

"As with all investigations, all forms of evidence are critical to the process and photographic and/or video-graphic evidence provided by the public will help."

Members of the public can alert AVS of any suspected cases via the online feedback form on its website at www.avs.gov.sg/feedback or call 1800-476-1600. Information shared with AVS will be kept strictly confidential.

Related Stories
Man who posted about wanting to 'put down' adopted dog apologises after being slammed
No evidence of mistreatment of dogs after accusations against groomer PawPaw Group: AVS
AVS investigating alleged case of animal abuse: Videos of man punching poodle were filmed years ago
More About:
dog
viral
controversial
NParks