Man who stabbed, slashed NParks officer in 'vicious' attack gets over 13 years of jail 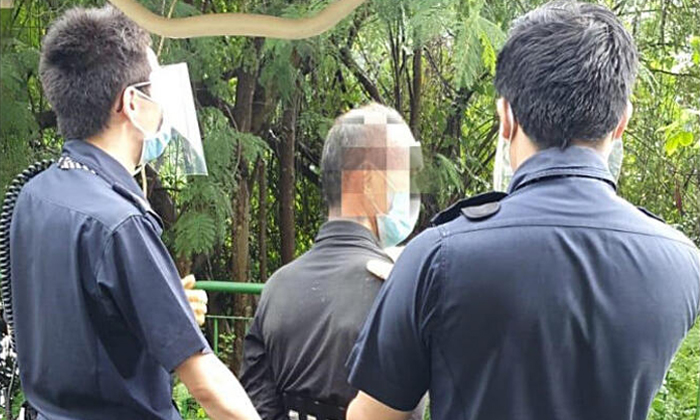 A 62-year-old rag-and-bone man who relentlessly stabbed and slashed a safe distancing enforcement officer who had asked him to wear a mask was sentenced to 13 years and four months' jail on Friday (March 18).

Ahirrudin Al-Had Haji Arrifin had stabbed the National Parks Board (NParks) officer in the chest with a blade concealed in his walking stick and then slashed the victim indiscriminately with a kerambit knife.

The unprovoked attack at the Sungei Serangoon Park Connector almost severed the left thumb of the 38-year-old officer and left him with permanent injuries.

In sentencing Ahirrudin, High Court judge Tan Siong Thye said his vicious onslaught against the officer, who was unarmed and did not retaliate, was "simply senseless, abhorrent and callous".

Justice Tan said the 20.8cm-long concealed blade essentially transformed the walking stick into a spear. It was a "sheer miracle" that the blade did not penetrate the victim's heart, he said.

The judge said a deterrent sentence was warranted as the attack led to public disquiet over the safety of public servants carrying out their duties.

Ahirrudin pleaded guilty last week to a reduced charge of voluntarily causing grievous hurt to the officer by stabbing and slashing him on May 4, 2020. He was originally charged with attempted murder.

Ahirrudin also pleaded guilty to a charge of possession of a scheduled weapon and a charge of failing to wear a mask in public.

Three other charges were taken into consideration.

The jail term includes a three-month term imposed in lieu of caning as Ahirrudin cannot be caned under the law due to his age. The judge said he would have handed down 18 strokes if Ahirrudin was eligible.

Justice Tan also questioned why Ahirrudin was so heavily armed on the day of the attack.

The judge wondered: "Why is there a need to bring along so many dangerous weapons for his protection when his sole purpose was to cut pandan leaves?"

Despite Covid-19 circuit breaker restrictions, Ahirrudin went out that morning to pick pandan leaves and had a kerambit knife hidden in each shoe and the walking stick taped to his bicycle.

Defence counsel Rajan Supramaniam told the court last week that his client brought along the weapons for "protection".

At about 11.45am, Ahirrudin was spotted by two NParks officers - the victim and a female colleague - who were putting up SafeEntry signs along the park connector.

The victim asked Ahirrudin why he had cut the pandan leaves and whether he had a mask.

Ahirrudin questioned the need to wear a mask and insisted that he was entitled to cut the pandan leaves.

He became more agitated and retrieved the walking stick from his bicycle.

The officer photographed Ahirrudin and asked for his particulars, and called the police when the accused did not cooperate.

Ahirrudin then verbally abused the officer, who recorded a video of the accused. This further angered the accused.

Without warning, Ahirrudin removed the wooden sheath on the walking stick and stabbed the victimin the chest with the bladed end.

The victim tried to pull the blade out of his chest but Ahirrudin pushed it further in.

Ahirrudin then slashed the victim with one of the knives from his shoe.

A passer-by tried to disarm and pin down Ahirrudin but did not succeed, and ran off with the two NParks officers to call the police.

Ahirrudin was arrested that afternoon.