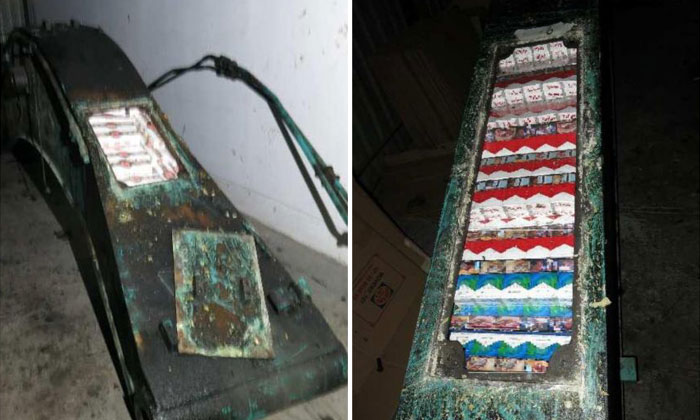 A man who repeatedly dealt with duty-unpaid cigarettes has been jailed 39 months and fined $16 million, and will serve an additional 25 months and a day of jail as he did not pay the fine.

Singaporean Loh Hu Seong, 58, was found to have worked with a Malaysian man in 2018 to smuggle duty-unpaid cigarettes into Singapore, in return for $1,000 to $2,000 for each shipment, going so far as to search for warehouses in Singapore for the operation, Singapore Customs said on Thursday (July 1).

He and the Malaysian man sourced for excavator parts in Singapore to hide the cigarettes, using an industrial unit in Tuas South Street 1, which Loh rented, to dismantle the excavators and retrieve the cigarettes.

Singapore Customs in November that year found 5,428 cartons and 25 packets of duty-unpaid cigarettes during a raid on the unit, with many of the cigarettes concealed in recycled excavator arms.

Investigations showed that Loh, during the same period, also engaged in "a criminal conspiracy" with another Singaporean man when he told him he needed excavator arms with holes in them to hide cigarettes.

That man, who was unnamed, then got a worker to cut holes in the excavator arms and placed brackets with screws at the corners to cover the hidden spaces. Court proceedings are ongoing against the man.

Loh is a repeat offender. He had been sentenced to 30 months' jail in 2016 for the same crime. This time, his punishment was enhanced.

The assistant director-general of Singapore Customs' intelligence and investigation arm, Mr Yeo Sew Meng, said: "Singapore Customs will not let up in our efforts to clamp down on cigarette smuggling activities. The jail sentence and fine imposed serve as a reminder of the stiff penalties repeat offenders face. Those who are contemplating illegal cigarette activities should think carefully about the consequences when they are caught."