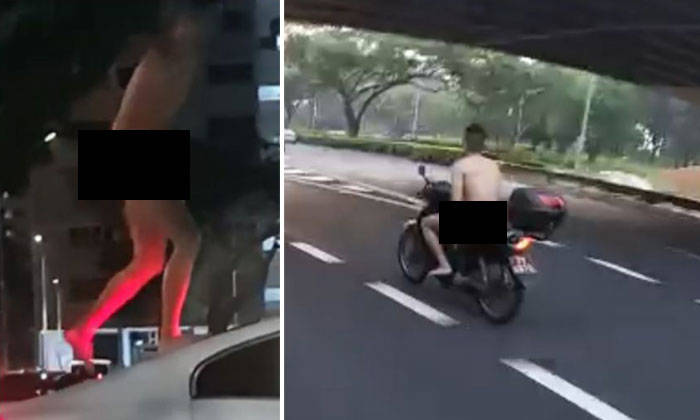 He was found naked in public places and also rode a motorcycle in the nude. Eyewitnesses recorded videos of him when he was in the buff and these went viral.

On Friday (March 11), Yeo Qi Wei, 25, pleaded guilty to two counts of appearing nude in public and one count of criminal trespass.

Five other charges will be considered during sentencing. He committed all of his offences on June 9 and 10 last year.

Yeo entered Singapore Shopping Centre in Clemenceau Avenue at around 12.30am on June 9 last year.

When approached, he told a security guard that he was going to the fifth storey for a massage.

The guard went to a security counter and continued to observe Yeo through a closed circuit television (CCTV) monitor. He saw that Yeo had gone to the fourth storey.

The guard, who followed him there, then heard a loud sound. He later saw Yeo inside one of the units and it had a damaged door.

Deputy Public Prosecutor Jordon Li said: "The accused did not respond to the complainant. The complainant then returned to the security counter to call the police. The accused then left the building.

"The accused was captured on CCTV forcing open the door to the unit and damaging it. The CCTV also captured the accused entering the premises, connecting his laptop to a TV and watching something on it for a while before eventually leaving the premises after the complainant came."

In another incident, a man was sitting in his vehicle at a carpark in Toa Payoh on the morning of June 10 when he saw Yeo walking towards him, clad in only his underwear.

Yeo took off the garment and climbed onto the man's vehicle.

Soon after, a naked Yeo rode away on his motorcycle which was parked nearby.

He left his underwear on the man's vehicle, the court heard.

Later that morning, another eyewitness in Choa Chu Kang saw Yeo naked and he appeared to be touching his private parts at a staircase landing of a block of flats.

The DPP said between 5.43am and 3.36pm on June 10, the police received eight reports involving Yeo being naked in public places.

Photos and videos of him riding his motorcycle around Singapore while naked were also circulated on the Internet.

On Friday, the court heard that Yeo, who has a degree in banking and finance, was referred to the Institute of Mental Health (IMH) during investigations into the case and was diagnosed with bipolar affective disorder.

DPP Li said that Yeo had likely experienced symptoms of a manic episode for about a week prior to June 10.

The prosecutor added: "While the IMH psychiatrist assessed the accused to be not of unsound mind at the time of the offences, he also opined that the accused's bipolar affective disorder had a substantive contributory link to his offending behaviour.

"The accused was assessed (to have) a low risk of offending and recommended for close follow-up with psychiatric services."

District Judge Kessler Soh then called for a report to assess Yeo's suitability for a mandatory treatment order (MTO).

Offenders given an MTO will undergo treatment for their mental condition in lieu of jail time.

Yeo will be sentenced on May 5.