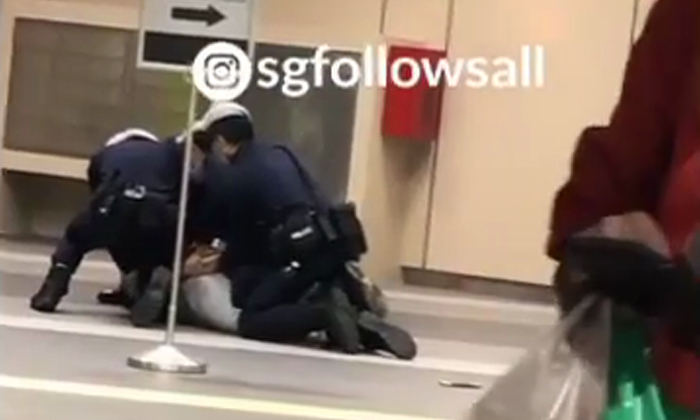 A man assaulted police officers and put up a violent struggle to resist arrest after refusing to wear his mask properly at Yishun Bus Interchange on Monday (March 8).

A video posted online shows the man shouting while being pinned down by police officers.

He can be heard screaming, "I comply!" followed by a vulgarity.

In response to a Stomp query, the police said they were conducting patrols at Yishun Bus Interchange when they came across a 29-year-old man who was not wearing a mask properly in a public place at 3.59pm.

"In his attempt to get away, he hit an officer in the chest, shoved two officers and put up a violent struggle to resist arrest."

The man was attended to by a Singapore Civil Defence Force (SCDF) paramedic at scene.

He was subsequently arrested for disorderly behaviour and voluntarily causing hurt to deter a public servant from discharging his duty.

In their statement, the police also advised members of the public to cooperate when approached by officers.

They added: "The police take a stern view of abusive behaviour against public servants who are carrying out their duties."