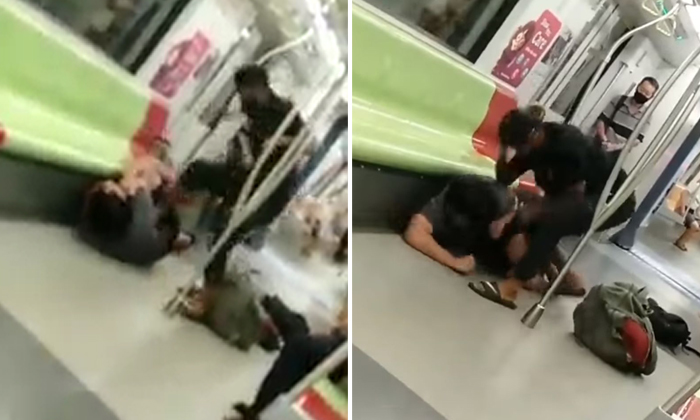 A 40-year-old man who was caught on camera assaulting a 24-year-old man following a dispute on Sunday (May 23) has been arrested.

The police said they were alerted to a case of an assault on a MRT train along the Downtown Line, in the vicinity of 60 Bukit Timah Road, at 10.13am.

A video of the incident was posted on Facebook and has gone viral online.

In the video, a man can be seen raining blows on another man who was on the ground.

The assailant can be seen using his fist and elbow to repeatedly hit the victim, as well as kicking and stomping on him.

Many netizens have expressed shock and disbelief over the vicious attack, with many questioning why nobody on the train stepped forward to intervene.

The police said that upon receiving a '999' call, police officers from the Public Transport Security Command were despatched to render assistance.

"However, the persons involved were no longer at scene," the police added.

Police officers from Central Division worked swiftly with officers from the Public Transport Security Command to identify and locate the parties involved.

A 40-year-old man was subsequently identified and arrested on the same day for the offence of public nuisance. The man will also be investigated for voluntarily causing hurt.

Preliminary investigations revealed that the 40-year-old man and a 24-year-old man had a dispute while they were on the train.

The dispute escalated, resulting in the older man allegedly assaulting the younger man.

In a statement, the police said they will not tolerate acts of violence and will act swiftly to take offenders to task.

They added: "The police would also like to advise members of the public to call '999' if they see an assault taking place.

"Videos of the incident should be shared with the police quickly, instead of being circulated on social media platforms."

Ms Tammy Tan, senior vice-president of corporate communications at SBS Transit, which operates the Downtown Line, said the incident happened on the train that was heading towards Bukit Panjang.

According to Ms Tan, an SBS Transit employee was alerted to the commotion and immediately proceeded to the train car.

"He saw the victim alone and asked if he needed medical assistance," she said.

"The latter, however, declined any assistance and said that the aggressor had already alighted. He insisted he was fine and proceeded on with his journey."

SBS Transit will share its security camera footage with the police for their investigations, added Ms Tan.