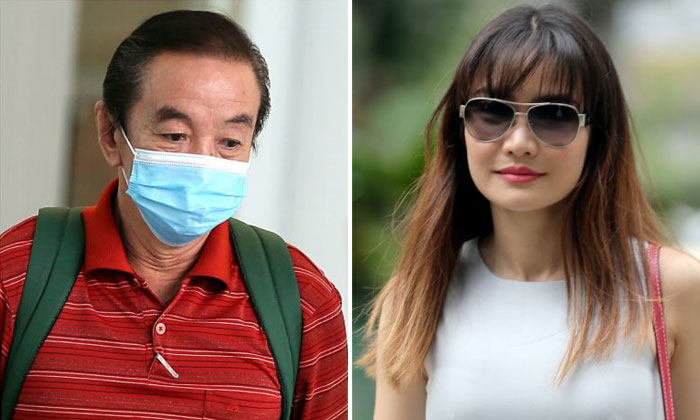 A man pulled actress-model Melissa Faith Yeo Lay Hong's hair and punched her head in May last year after he saw her quarrelling with others at the void deck of an Ang Mo Kio block of flats.

Lim Kheng Huat, 62, was on his way home after a drinking session when he heard the commotion and stopped to observe the tiff.

On Wednesday (Aug 26), Lim was fined $3,500 after pleading guilty to an assault charge.

The court heard that Ms Yeo, 34, was outside her home shortly after midnight on May 2 last year when she heard a commotion at a nearby void deck.

When she realised it involved her neighbour, she went downstairs.

The argument was between a married couple and a father-and-son pair over a parking lot.

For some reason, Ms Yeo got involved in the dispute.

When she spotted Lim standing nearby, she assumed that he was a relative of the father-and-son pair.

She then asked the son "why he needed his father and uncle to back him up in a fight".

The quarrel ended when other residents told the group off for making noise, said Deputy Public Prosecutor Michelle Tay.

Ms Yeo was walking towards a lift lobby when Lim assaulted her.

She saw a doctor at Khoo Teck Puat Hospital later that day and was found with injuries including tenderness over her nose and jaw.

Ms Yeo was given three days of medical leave.

For assault, Lim could have been jailed for up to two years and fined up to $5,000.