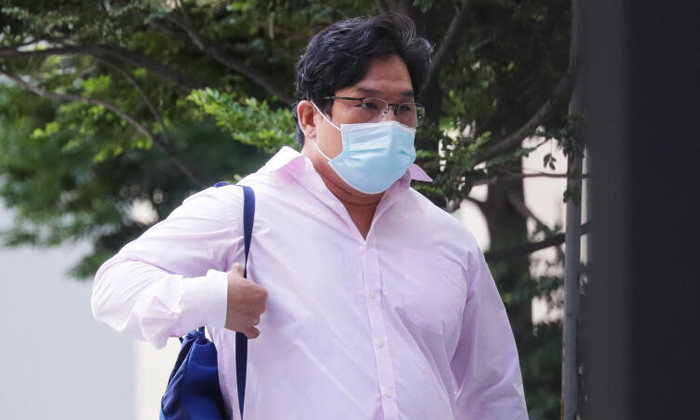 A man who pressed an emergency stop plunger to halt an MRT train at Buona Vista station before assaulting a security officer was on Tuesday (Nov 9) fined $5,600.

The Singaporean, now 49, had earlier pleaded guilty to one count each of being a public nuisance, assault and using criminal force on another man.

Tan had dropped his mobile phone on the tracks as he was boarding a train at Buona Vista MRT station around 11am on Feb 29 last year.

When he sought assistance, an SMRT station manager said he could only retrieve the phone the following day as train services could not be disrupted.

Tan insisted that the services be stopped and the station manager alerted the police.

Tan left the station when officers arrived, only to return around 3.50pm that day.

He told SMRT employees that he needed his phone urgently as his baby had a fever and he had to speak to his girlfriend about the matter.

They replied that train services could not be disrupted and that his situation was not an emergency.

Despite this, Tan marched towards a station platform where the plunger is located and shoved an SMRT assistant manager, 56, who tried to stop him.

Tan then pressed the plunger, causing a train that was approaching the platform to stop.

An argument later erupted between Tan and two SMRT employees, including the assistant manager.

A 62-year-old security officer spotted the commotion and noticed that Tan was behaving in an aggressive manner.

Tan was heading out of the station when the security officer tried to stop him by grabbing his shirt. Tan punched the man's face and left the scene.

He was arrested about four hours later.

The court had earlier heard that Tan has a history of schizophrenia and has since made a voluntary compensation of $200.30 for the security officer's medical bills.

Offenders convicted of being a public nuisance can be jailed for up to three months and a fined up to $2,000.