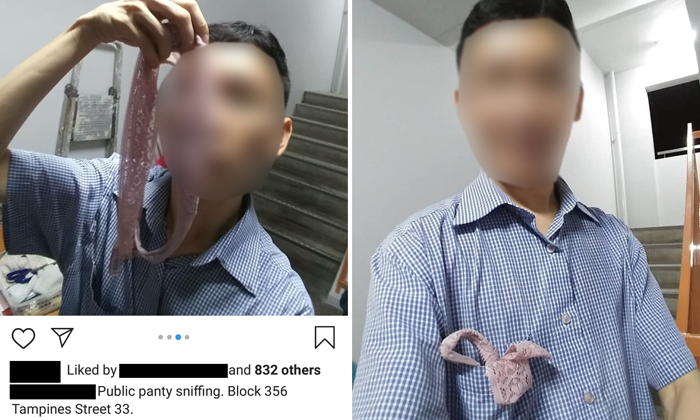 A 34-year-old man who posted photos of himself sniffing female underwear and performing lewd acts along common corridors has been arrested for public nuisance.

The man had uploaded the images on Instagram along with captions such as "public panty sniffing".

He also claimed to have masturbated onto the undergarments before 'hanging them back'.

According to the photo captions, he committed the acts at the common corridors of HDB blocks in Tampines and Choa Chu Kang.

The police said they received multiple reports on Thursday (Aug 15) about the Instagram posts.

Through follow-up investigations, officers from Jurong Police Division established the man's identity and arrested him the following day (Aug 16) at about 4.30am, less than eight hours after the first report was made.

He will be charged in court on Saturday (Aug 17) with public nuisance and faces a fine of up to $1,000 if convicted.

A check online shows that the man's Instagram account is still publicly accessible, though with most of the offending posts removed.

However, a picture that shows the man holding a female undergarment in front of his face remains available with a now-edited caption.

His latest Instagram post, dated six hours ago, said: "Don't act like you guys don't like these kind of things. I will still continue to collect them. Will be posting a video of me sniffing soon."