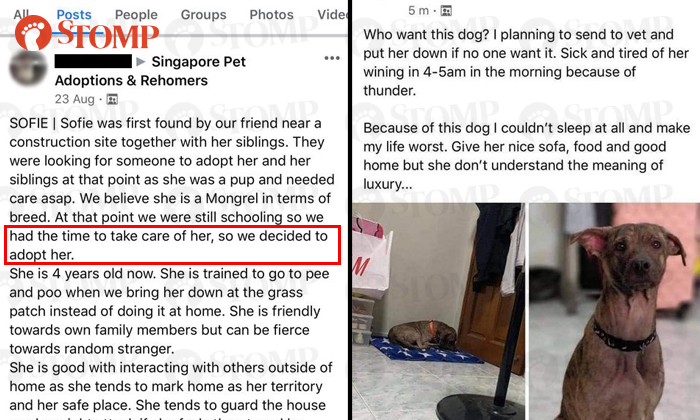 Submitted by Stomper A, W

A netizen has apologised for posting about wanting to "put down" his dog — which he had adopted — and clarified that they were words made in "a heat of anger".

Stompers A and W alerted Stomp to the Facebook user's posts and shared screenshots.

The Facebook user had posted about Sofie the mongrel on August 23 in hopes of rehoming her permanently.

According to him, Sofie was found with her siblings at a construction site when she was just a puppy. She is now four years old.

The Facebook user said: "At that point, we were still schooling, so we had the time to take care of her, so we decided to adopt her." 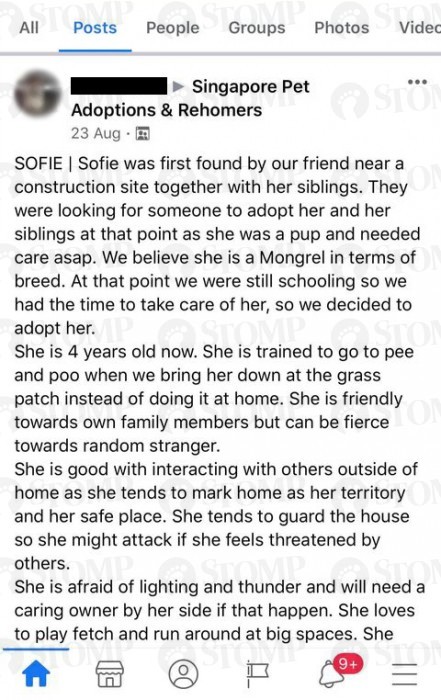 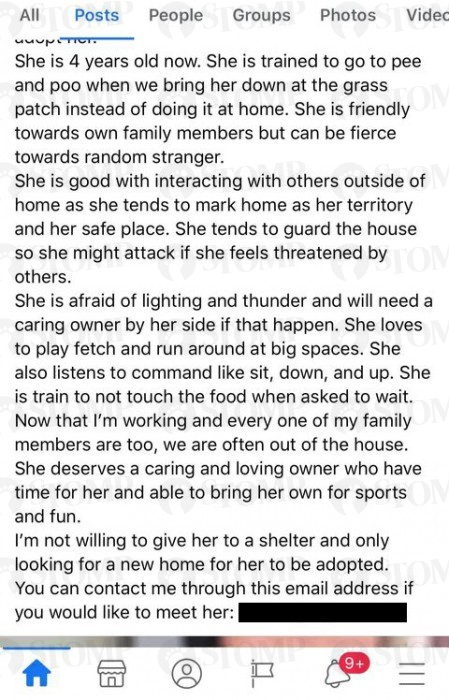 In his post, the Facebook user gave a description of Sofie's traits such as how she is toilet-trained, answers to commands, enjoys playing fetch, but is afraid of lightning and thunder.

He added: "She deserves a caring and loving owner who has time for her and (is) able to bring her own for sports and fun.

"I'm not willing to give her to a shelter and only looking for a new home for her to be adopted."

While it is not an uncommon practice to rehome pets, the Facebook user drew flak when he complained about Sofie in another post two months later. 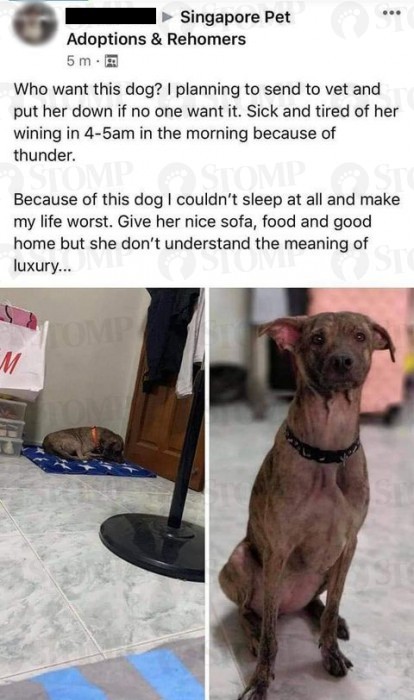 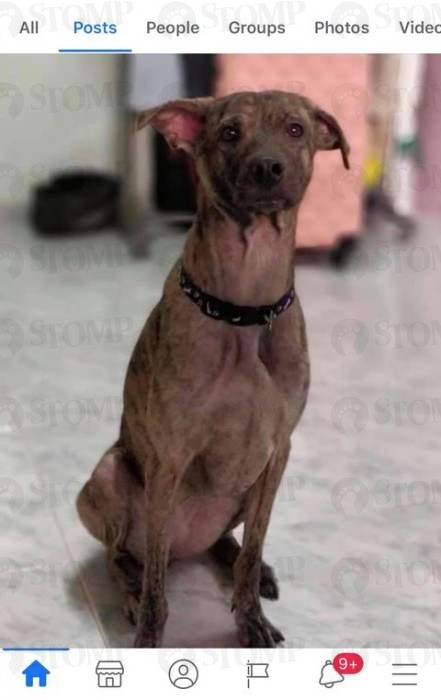 In the post, he said he "planned to send (Sofie) to the vet and put her down if no one wants it", adding that he was "sick and tired" of the dog whining during wee hours due to thunder.

He also said that he was unable to fall asleep because of Sofie, claiming that she made his life "worst" and did not appreciate the supposed luxuries he had provided her with.

The post drew the ire of numerous netizens, who slammed the user for being irresponsible. They were also concerned for Sofie and worried that she would be euthanised.

Stomper W said: "We need more people to be aware of the responsibility when adopting a dog as it is a life commitment."

On Wednesday night (Oct 28), the Facebook user apologised for his post and said: "I wrote it in a heat of anger after days of unpeacefuI rest." 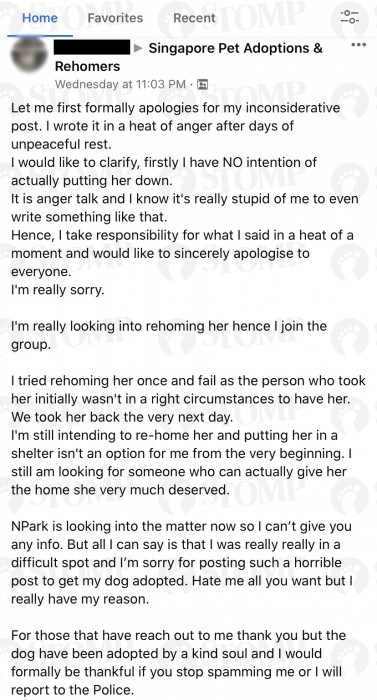 He added: "I would like to clarify, firstly I have NO intention of actually putting her down. It is anger talk and I know it's really stupid of me to even write something like that.

"Hence, I take responsibility for what I said in a heat of a moment and would like to sincerely apologise to everyone.

The user also clarified that he had truly been looking into rehoming Sofie and giving her the forever home that she deserves.

He then said that he is unable to share further details as the National Parks Board (NParks) "is looking into the matter now".

"But all I can say is that I was really really in a difficult spot and I’m sorry for posting such a horrible post to get my dog adopted," he wrote.

"Hate me all you want but I really have my reason.

"For those that have reached out to me, thank you but the dog has been adopted by a kind soul and I would formally be thankful if you stop spamming me or I will report to the police."

In another update on Thursday, the Facebook user shared a video of Sofie enjoying the outdoors to ensure netizens of her well-being.

"Currently she is in good hands and really happy with new dog friends," he wrote.

He also said that he regretted making the controversial post and thanked those who chose to forgive him for his "mistake".