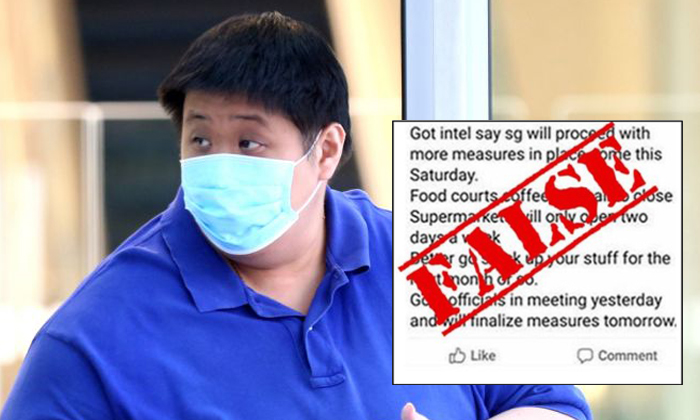 A 40-year-old Singaporean man has been charged over false claims he allegedly made that supermarkets would only open two days a week as part of enhanced measures here.

Kenneth Lai Yong Hui, 40, is accused of posting the false information on Facebook group "Taxiuncle", saying he had received information that enhanced Covid-19 circuit breaker measures would be rolled out on April 18.

The Singaporean was hauled to court on Monday (April 27) and charged with communicating a false message.

The Straits Times understands that Lai is a taxi driver.

He is believed to be the first person to be charged with the offence during the coronavirus outbreak.

Those convicted can be jailed for up to three years and face a maximum fine of $10,000.

According to court documents, he allegedly posted the false message saying he had "intel" that Singapore would purportedly impose extended measures on April 18.

Police revealed details of his alleged message on Monday. They said that between April 15 and 16, Lai wrote: "Food courts, coffee shop all to close. Supermarkets will only open two days a week.

"Better go stock up your stuff for the next month or so. Government officials (were) in (a) meeting yesterday and will finalise measures tomorrow."

He is said to have done this in a Bishan flat.

On Monday, Lai told the court that he intends to plead guilty, and regrets his actions.

He said: "I'm very sorry and remorseful for what I had done."

In their statement, police said they will not hesitate to take action against those who transmit or communicate falsehoods.

"Members of the public should refer to official sources for information and avoid spreading unsubstantiated information or false rumours, as these may cause fear and public alarm," police added.

The circuit breaker period started on April 7 to curb the spread of the coronavirus here, and has been extended to June 1.

All stand-alone food and beverage outlets, hairdressing salons and barber shops were shut from April 22.

Related Stories
FB post about GrabFood rider 'fined $300 for wearing cloth as mask' is fake, he was asking police for help over theft
Messages about police fining motorists at road blocks over lack of safe distancing are untrue
Man fined $300 for chatting with friend at bubble tea store without safe-distancing, debunks fake news
More About:
fake
facebook
Covid-19