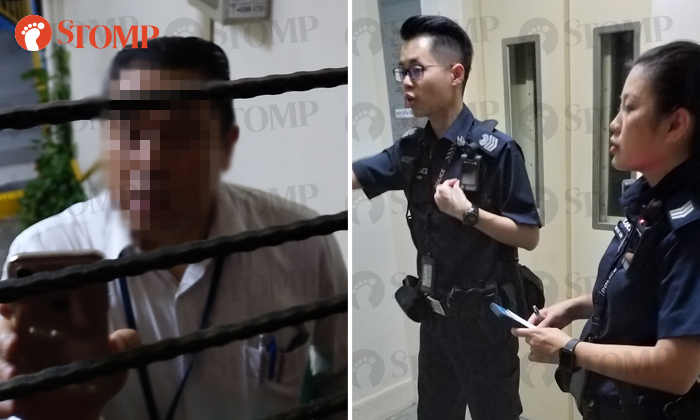 A 56-year-old man who posed as a Housing & Development Board (HDB) contractor and asked residents to pay deposits for 'repair works' has been arrested for his suspected involvement in a series of cheating cases.

In an earlier report, Stomper Vernon shared how the man had visited his unit at Block 185 Toa Payoh Central on March 22 to offer patch work services for the ceiling.

Vernon turned down the man, who then approached his 76-year-old neighbour instead.

When 72-year-old Vernon intervened, the man allegedly punched him.

(Vernon said he managed to fence off the man's punch, but suffered a swollen palm in the process)

An HDB spokesman told Stomp in a March 26 statement that it was aware of the incident, adding: "We would like to clarify that the man does not work for HDB and HDB did not appoint him to carry out any works in HDB flats."

In a statement on Tuesday (Apr 2), the police said a 56-year-old man has been arrested for cheating more than 19 victims.

Stomp understands that the man is the same one whom Vernon encountered.

The police had received several reports between March 2018 and March 2019, about how the man identified himself as a HDB-appointed contractor and purportedly cheated victims into handing over deposits ranging from $100 to $300 for repair works.

"Preliminary investigations revealed that the man was neither authorised nor appointed by HDB for such works," added the police.

The man was nabbed on April 1 after officers from Bedok Police Division established his identity through follow-up investigations.

He will be charged in court on April 3 with cheating.

If found guilty, he may be jailed for up to 10 years and fined.

In their statement, the police also reminded members of the public to be vigilant and wary of persons who may be posing as HDB-appointed contractors, officers from other government agencies, or staff from private companies.

Members of the public who wish to know more on how to guard against such errant contractors may visit the HDB InfoWEB page for more advice.

Related Stories
Man who allegedly punched Toa Payoh resident not from HDB, assisting with police investigations
FB user’s claim of harassment by officers and being 'locked for 8 hours' is false: HSA
HDB responds to FB user's claim he was given summons for alighting car to help woman in wheelchair
More About:
HDB
assault
scam
fake
injured
arrest