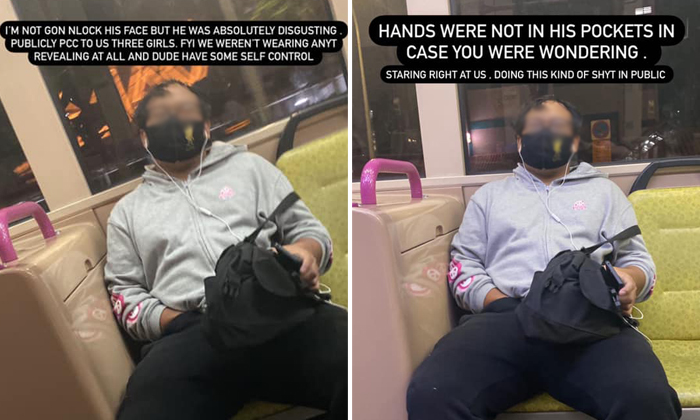 A man who performed an obscene act in front of three women on a bus was a former Foodpanda employee who had been dismissed a month ago, a spokesman told Stomp.

Facebook user Jorene Ng shared how she had encountered the "disgusting act" that occurred on bus service 225G on Monday (March 29), at around 12.05am.

In a post on the same early morning, Ng said she and her sisters had been sitting directly opposite the man on the bus.

She recounted: "We were the first few to enter the bus and he followed after, choosing the seat directly opposite us.

"He then put his hands in his pants and [proceeded to touch] himself in front of us (looking directly at us). We felt disgusted by his actions and approached the bus captain."

Ng, who posted photos showing the man wearing a jacket with the Foodpanda logo on it, also said she hoped that the delivery platform would "pursue this matter".

She wrote in her post: "We are traumatised by his actions and we felt unsafe during that time. We then immediately left the bus in which he alighted the same bus stop as us but walked another direction."

Ng also thanked the bus captain for making sure that she and her sisters were safe before driving off.

"This is such disrespect towards females and is absolutely outrageous," she added.

In response to a Stomp query, a Foodpanda spokesman said on Tuesday: "The photos circulated were disturbing.

"Upon our internal investigation, we can confirm that the individual captured in the photo was a former employee dismissed a month ago."

Foodpanda has also reached out to Ng to offer their support over this "shocking incident", the spokesman added.