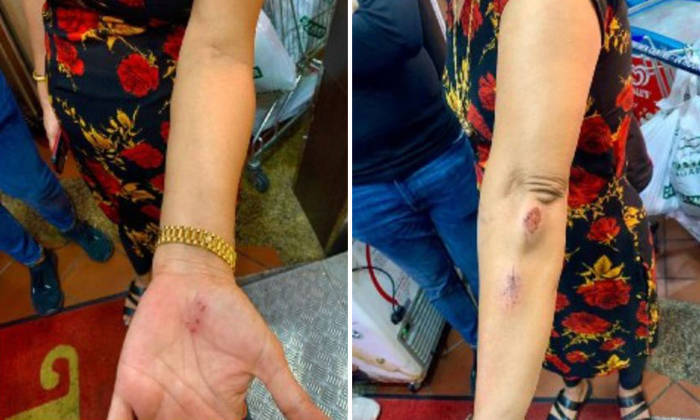 A man accused of kicking an Indian Singaporean woman's chest in May was charged on Friday (Sept 10) with one count each of wounding her racial feelings and committing a racially aggravated attack.

Wong Xing Fong, 30, allegedly kicked private tutor Hindocha Nita Vishnubhai in the chest with his right leg on May 7.

This case made the headlines earlier this year after the mother of two adult children told The Straits Times that she was attacked while brisk walking.

She said she had lowered her mask below her nose to prevent breathlessness as she was walking fast, dressed in a sleeveless top and track pants.

A man, Madam Nita said, shouted at her to wear her mask over her nose.

When he started verbally abusing her even after she explained that she was exercising, she decided to walk away. But he ran towards her and gave her a "flying kick".

Madam Nita, who sustained scratches on her arms and hands when she fell, filed a police report.

The incident took place at around 8.45am, at a sheltered walkway near the Northvale condominium in Choa Chu Kang.

Prime Minister Lee Hsien Loong and several other ministers later denounced the attack in separate Facebook posts on May 10.

PM Lee said that the attack "goes against everything that our multiracial society stands for, and the mutual respect and racial harmony that we hold so dear".

Law and Home Affairs Minister K. Shanmugam said: "Based on the lady's version, this seems to be a racist, xenophobic attack. Unacceptable."

In her post, Minister for Sustainability and the Environment Grace Fu urged people to keep in mind Singapore's core value of unity as a society.

She said: "While Covid-19 has brought out the best in people in difficult situations, with many coming forward to help those in need, it is unfortunate that discriminatory behaviour and even violent xenophobic attacks stemming from fear and intolerance have also been witnessed around the world.

"We felt indignant when Asians were attacked merely because of their race in other countries. Let us not allow such behaviour to take root here. As we battle this unprecedented pandemic, it is more important than ever for our communities to band together and foster stronger cohesion."

Wong's pre-trial conference will be held on Oct 8.

If convicted of voluntarily causing hurt to another person in a racially aggravated attack, he can be jailed for up to 4½ years and fined up to $7,500.

If convicted of wounding another person's racial feelings, Wong can be jailed for up to three years and fined.