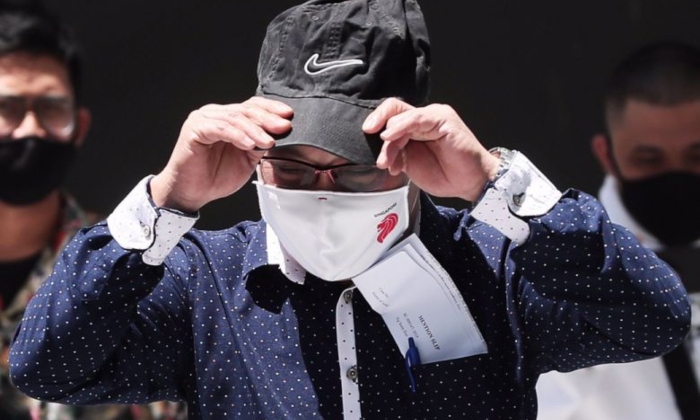 A man who impersonated a police officer and touched a woman's breast while drunk was sentenced to four weeks' jail on Thursday (Aug 13).

Ng Soon Hee, 48, also faced another charge, which was taken into consideration, of insulting the 26-year-old victim's modesty by making a lewd comment about her breasts.

The court heard that on March 22 last year, the victim and her 34-year-old boyfriend were drinking beer at a sheltered walkway near Block 173 Gangsa Road in Bukit Panjang when Ng, who reeked of alcohol, approached them.

The couple cannot be named due to a gag order to protect the victim's identity.

At about 1.30pm that day, Ng, who was employed at SMRT at the time, held out his SMRT staff pass, claiming to be a police officer.

He shouted at the couple, saying that they were making too much noise and should not be drinking alcohol after 10.30pm.

When the couple tried to take a closer look at Ng's staff pass, which was pinned onto his SMRT shirt, he used his hand to cover the pass.

Suddenly, Ng looked at the victim and made a lewd remark about her breasts.

Her boyfriend confronted Ng about the comment, and she moved in between the men to calm them down.

As Ng tried to push her out of his way, he used his forearm to push against her breast and then used his right hand to cup her breast while pushing her aside.

Her boyfriend called the police.

After he was arrested at about noon the next day, a blood sample from Ng indicated that he was drunk.

Deputy Public Prosecutor Ho Jiayun said that not only was Ng impersonating a public servant, but a police officer, and he did so while drunk, which further tarnished the police force.

For the charge of using criminal force, DPP Ho said Ng was "aggressive and intrusive" towards the victim in grabbing her breast.

Ng's lawyer, Mr Choo Si Sen, argued for a shorter sentence, as Ng had been cooperative with police investigations.

In sentencing, District Judge Edgar Foo said the charge of using criminal force was "more aggravating because there was touching of private parts not once, but twice" while Ng was drunk.