Man who did not wear mask, hurled vulgarities and racist remarks at store supervisor charged 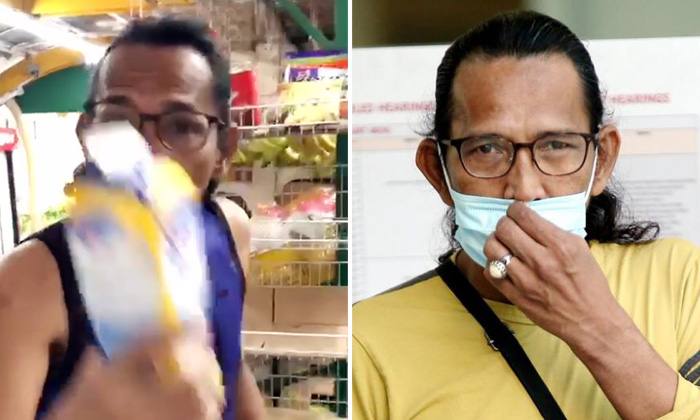 A man, who was allegedly caught on video verbally abusing a store supervisor with vulgarities and racist remarks, was among six people taken to a district court on Wednesday (April 22) over a range of charges in separate incidents amid the coronavirus outbreak.

Mohamed Ali Ramly, 52, is accused of failing to wear a mask over his nose and mouth when he went to the Li Li Cheng Minimart at Block 651, Jurong West Street 61 at around 6pm on April 17.

The Straits Times had earlier reported that he was barred from entering the store because of this. Ali then allegedly abused the supervisor with obscene words and racist remarks.

He was charged with one count each of harassment and wounding the supervisor's racial feelings. He is also accused of an offence under the Covid-19 (Temporary Measures) Act 2020 for failing to wear a mask when leaving his home.

Ali and three other Singaporeans, Ravi Sinathamby Subramaniam, 52; Christopher Amurutham, 56 and Poh Cher Wee, 58, are believed to be first few people to be hauled to court over offences under the Act.

Ravi faces eight charges in all, including two under the Act and three counts of harassment.

He is accused of unlawfully meeting another person in front of Block 74, Whampoa Drive between 7pm and 7.30pm on April 14.

Four days later, Ravi was allegedly spotted not wearing a mask over his nose and mouth at a coffee shop at nearby Block 81.

He is then said to have hurled vulgarities at safe distancing measure enforcement officers Catherine Tan Zi Yun and Elton Lim Jun Xiong. Ravi is also accused of threatening to cause hurt to the pair.

Separately, Christopher allegedly left his home at Block 15 Lorong 7 Toa Payoh at around 1pm on April 18 before going to a public bench at nearby Block 20 to eat and drink.

He is also said to have failed to wear a mask over his nose and mouth at the time.

When policewoman Sergeant Ow Hui Shi later approached him, he allegedly pushed her left hand away and verbally abused her with obscenities.

Christopher faces two charges under the Act as well as one count each of harassment and using criminal force on a public servant.

Poh was charged one count each of an offence under the Act and causing annoyance to a police officer while drunk.

He is accused of unlawfully meeting two other people for "a casual chatting session" at an open area outside the ground floor lift lobby of Block 532 Bedok North Street 3 between 9pm and 11.30pm on April 14.

Poh is said to be drunk when he allegedly shone the flashlight of his mobile phone in the officer's face on two occasions that evening, annoying the latter.

A Taiwanese woman, Sun Szu-Yen, 46, is accused of one count each of harassment and performing a rash act. She allegedly sneezed in the direction of another woman and used insulting words on her at the entrance of Ion Orchard shopping mall on April 12.

In an unrelated incident on June 4 last year, Sun allegedly hurled items such as a plastic chair and a vacuum cleaner from a third-storey unit of the Fifth Avenue condominium in Fifth Avenue near Bukit Timah Road. Her case has been adjourned to April 29.

The fifth man, Alan Lim, 55, is accused of one count each of assault, harassment and using criminal force on a woman.

He had gone to an Esso petrol station in Jervois Road at around 6pm on April 12 and met service attendant Nurul Iffarieha Mazri. ST had earlier reported that he allegedly refused to heed her advice to wear a mask before entering a store there.

Lim is accused of slapping Ms Nurul's left cheek and shoving her with both hands. He is also said to have abused her with vulgar language.

He allegedly committed the offences before the authorities made it mandatory from April 14 for everyone to wear a mask when going out. The only exceptions are children under two and those doing strenuous exercise

On Wednesday, the court heard that Ravi and Christopher intend to plead guilty to their charges. They will be back in court on April 29 and May 6 respectively.

The cases involving Poh, Ali and Lim have been adjourned to May 8.

For failing to wear a mask over the mouth and nose when outdoors, an offender can be jailed for up to six months and fined up to $10,000.