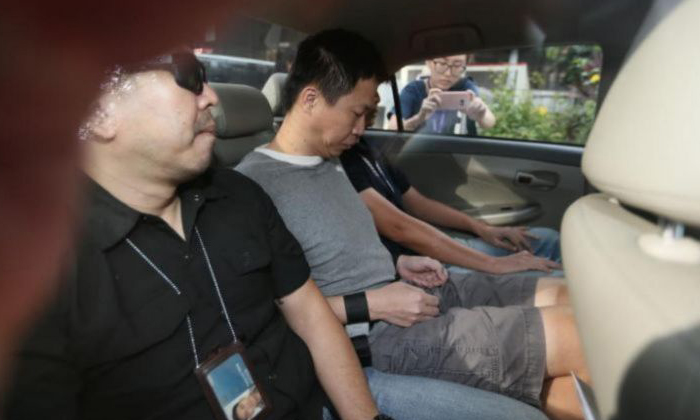 A man who went on the Dark Web to hire a hitman to murder his former lover's boyfriend was sentenced on Wednesday (Sept 18) to five years' jail.

The 47-year-old pleaded guilty in July to one count of intentionally abetting Camorra Hitmen to kill Mr Tan Han Shen, 30.

The website's name could be a reference to the Camorra, an Italian Mafia-type crime syndicate.

Last week, defence lawyer Lee Teck Leng pleaded for a sentence of 2½ years' jail, stressing that Camorra Hitmen was a scam, and highlighted articles to support this notion.

One of them, which appeared in July last year on British newspaper The Times' website, was titled "Hire-a-hitman website is a scam and its owner has made a killing" while the other, titled "The unbelievable tale of a fake hitman, a kill list, a darknet vigilante... and a murder", was published in Wired magazine last December.

On Wednesday, Judge Shaiffudin said that Mr Lee's argument that Camorra Hitmen was a scam was not a mitigating factor, as Hui truly believed that he had engaged a hitman.

The risk management executive started an extramarital relationship with Ms Ng Woan Man, 30, on April 22, 2016. She ended the affair in February last year when she realised he had no intention of leaving his wife.

Ms Ng started dating Mr Tan about two months later. On May 6 last year, Hui went on the Dark Web, accessed the Camorra Hitmen website and asked for Mr Tan's right hand to be cut off.

The Dark Web contains websites that are not indexed by search engines such as Google. It is accessible only by special software where users and website operators can remain anonymous as well as untraceable.

Hui was told he would have to pay the hitman only after the job was done. But, before that, he had to transfer sufficient bitcoins into his account on the Camorra Hitmen website as proof of his ability to pay.

Hui purchased 0.03 bitcoin valued at $600 on a bitcoin trading website and transferred the amount into his Camorra Hitmen account to facilitate the hit.

Three days later, Hui wanted acid to be poured on Mr Tan's face and transferred about $3,000 worth of bitcoins to his Camorra Hitmen account.

He asked Camorra Hitmen if they could proceed with the kill job if he added another US$1,000 (S$1,375) worth of bitcoins into his account.

They agreed on the arrangement and the murder was to take place between 7pm and 8pm on May 22 that year.

The court heard that meanwhile, a "British vigilante" known as Chris Monteiro provided US-based media company CBS with details about conversations from the "hitmen website".

On May 12 last year, a CBS journalist contacted the Singapore Embassy in Washington and informed it about the "hit". The Ministry of Foreign Affairs alerted the Singapore Police Force and officers arrested Hui five days later. No one was injured or killed in this case.

For intentionally abetting Camorra Hitmen to kill Mr Tan, Hui could have been jailed for up to seven years and fined.