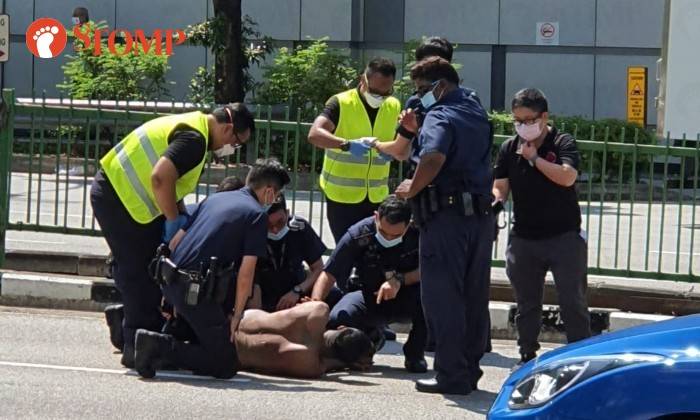 A man said to be the one caught in a viral video creating a ruckus on Fullerton Road in August appeared in a district court on Thursday (Dec 10).

Hassan Mansoor Mohammed Ameen, 29, was charged with two counts of using criminal force on public servants and two counts of assaulting them.

The Singaporean was also charged with one count each of behaving in a disorderly manner and harassment.

At 10.39am on Aug 21, Hassan allegedly walked in the middle of a traffic junction in Fullerton Road despite repeated warnings from nearby police officers not to do so.

He is said to have used criminal force on Sergeant Muthalif Ragamaan Wahab about 15 minutes later by pushing the policeman's chest.

Hassan is also said to have punched Sgt Joey Poh Yong Beng's face, causing bruises, while the policeman was trying to stop him from running in the middle of the road.

He is also accused of assaulting the officer by kicking his left thigh once.

Court documents do not state why Hassan was in SGH.

A video of the incident had earlier been uploaded onto the Facebook page of road safety community Beh Chia Lor - Singapore Road.

It shows a group of uniformed police officers confronting a man in the middle of Fullerton Road.

The two-minute-long clip has since gone viral.

The court heard on Thursday that Hassan intends to plead guilty to his charges.

His case has been adjourned to Jan 5 next year.

For each count of assaulting a public servant, an offender can be jailed for up to seven years and fined or caned.