Man who got knocked out in Geylang attack: I just looked at them and they started attacking me 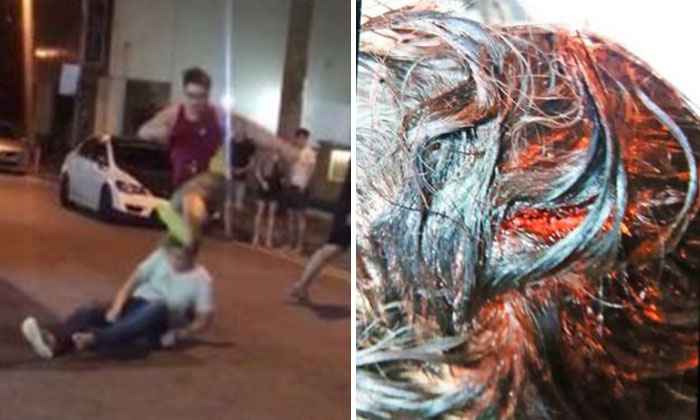 A private-hire vehicle driver who was beaten by a group of men during an incident in Geylang said that he was assaulted for merely looking at his assailants.

Almost 10 people were involved in the incident which happened on Thursday (March 15) at around 2.55am.

Videos of the fight were uploaded onto social media and became viral.

In the video, the victim is seen landing the first kick, before he was knocked out by one of his assailants.

Mr Chen, the victim shown getting beaten in the videos, spoke to Shin Min Daily News about the harrowing experience:

“My friends and I were at a porridge shop having supper when we ran into a ground of Vietnamese acquaintances, so we sat down and chatted with them.

“There were five to six men in their 20s seated at the table opposite ours.”

Mr Chen recalled that one of the men’s wallet had been hidden by his friend as a prank, and the man stood up to search for his wallet.

“When his friend returned his wallet, the guy threw it at us for reasons unknown. I looked at him, and he started hurling vulgarities at me.

“He taunted me in Hokkien, ‘what are you looking at? Let’s settle this outside if you’re not happy!”

To prevent an altercation, Mr Chen attempted to leave, but three men from the group followed him.

“Three of them came after me. Leading them was the man dressed in black. He was the one who threw the wallet at us.

“I kicked the leader in self-defense, and one of them punched me on my left cheek.

“I collapsed instantly. The three of them continued to stomp on my waist and kick my head, causing me to bleed.

Mr Chen said that he was left with a 10cm-long wound on his scalp and it has yet to heal.

“My friends later came and sent me to Singapore General Hospital (SGH). At the time, my white shirt was soaked in my blood.”

In response to media queries, a police spokesman said that a 22-year-old man was arrested for using threatening words and criminal force against public servants.

According to Shin Min Daily News, the man arrested was the same man caught on video assaulting the victim’s female companions.

Reporters later visited the suspect’s home and spoke to a young woman who identified herself as a close friend.

She told them that the suspect has remained to himself ever since the incident.

“He wouldn’t even speak to me these few days.”

Related Stories
New video of Geylang brawl shows clearly group raining blows on man while he was down
Women beaten up and guy gets stomped on during brawl in Geylang, 22-year-old man arrested
Fight at Orchard Rd: Man, 25, arrested for rioting after being taken to hospital
More About:
fight
brawl
injured