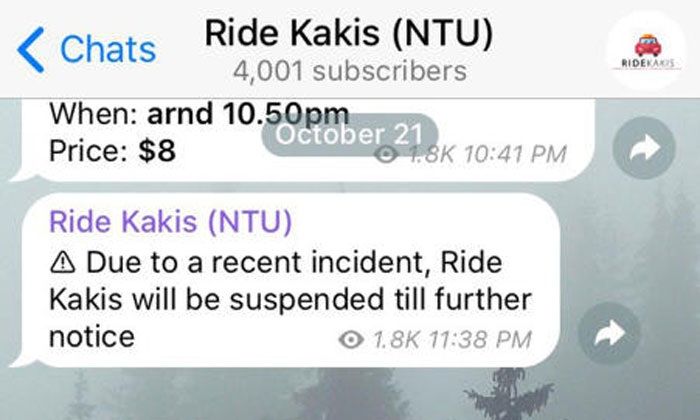 A driver has been arrested for allegedly molesting a student from Nanyang Technological University (NTU) while giving her a lift.

The man had allegedly offered the student a ride through a Telegram group, but he instead took her to a secluded carpark and molested her.

A police spokesman yesterday confirmed that a 25-year-old suspect was arrested for outrage of modesty after a report was made.

The woman had reportedly hitched a ride from the man last week through Ride Kakis, a carpooling group on social messaging app Telegram.

The group, which caters to the 23,000-strong student body as well as staff in NTU, has about 4,000 subscribers.

On Monday, a post appeared on Facebook page NTU Confessions, where the writer, identifying herself as the victim, said she was in an incident last week where a man, who is not from NTU, gave her a lift via Ride Kakis but took her to a secluded carpark to molest her.

"A police report has been made and the driver has been arrested.

"He claims he was trying to 'make friends' but I found out there is another report made against him on the same matter," she added.

She said that she was initially traumatised and would be writing to the school. She also warned others to be careful when using such services.

"If the person you're hitching or sharing cab with doesn't provide his or her contact details, make sure you ask for proper identification before getting into the same car.

"The thing about Ride Kakis is that anyone can use it and verification is not compulsory. Yes, hitch can make friends, but don't be so foolish to let your guard down," she said.

She added that she wished to remain anonymous until the case is closed.

The Ride Kakis group was suspended on Monday night. A message said the suspension was due to a recent incident, but did not provide details.

The service is unregulated and allows any user to submit a request for a ride or to offer a ride for a price that is negotiated between rider and driver.

Rides are either to or from NTU, with fares varying from $2 to $15.

Similar groups not restricted to just the university also exist on Telegram.

Replying to queries from The New Paper yesterday, Associate Professor Victor Yeo, Deputy Associate Provost (Student Life) at NTU, said the student has yet to contact the school regarding the incident.

"The university is very concerned to learn of this and strongly encourages the student to contact her school or the Student Affairs Office, so that we can support her as we have not yet received any report on the alleged incident," he said.

"We also advise all students to be aware that groups offering ride services are unregulated.

"Unlike official ride-hailing apps and public transport, they may pose certain risks."

Drivers can legally offer carpool services in Singapore without the need for additional licences, but this is limited to two carpool trips a day.

Those who wish to make more than two trips a day must obtain a Private Hire Car Driver's Vocational Licence.

First-year NTU student Chelsea Tan, 19, was surprised to hear of the incident.

"Most stories I've heard about Ride Kakis are about meeting nice drivers and having meaningful chats during the journey," she told TNP.

"It's actually a good service, because it helps students without cars to save money and drivers to ease their expenses."

She said she had taken at least three rides using the service, most recently on Monday, after her seniors mentioned Ride Kakis during orientation earlier this year.

"I was a bit wary at first, but all my rides through the group so far have been quite okay," she said.

"I will still use the service even though it might be a risk. I will just take more precautions like verifying that the driver is someone from NTU."

Mr Zac Chong, 24, a fourth-year NTU student who offers rides through the group, said he uses it to cover his petrol expenses when driving to school.

"It definitely doesn't fully cover the cost, but at least it covers a little," he said.

Mr Chong said it would not bother him if the service were to cease to exist.

"If there's a platform that allows me to cover my petrol costs, I don't mind offering carpool rides," he said.

"But if there isn't, life goes on, simple as that."

Related Stories
Ex-NUS senior lecturer rubbed groin against undergrad after getting aroused on campus bus
Jail, fine and caning for man who touched maid's breasts while family was away on holiday
NUS student’s molest victim: 'I had no idea he wrote an apology letter'
More About:
molest
outrage of modesty
NTU
student
arrested