Man, who failed math for 10 years and applied to NIE 5 times, looking for his teacher after finding success 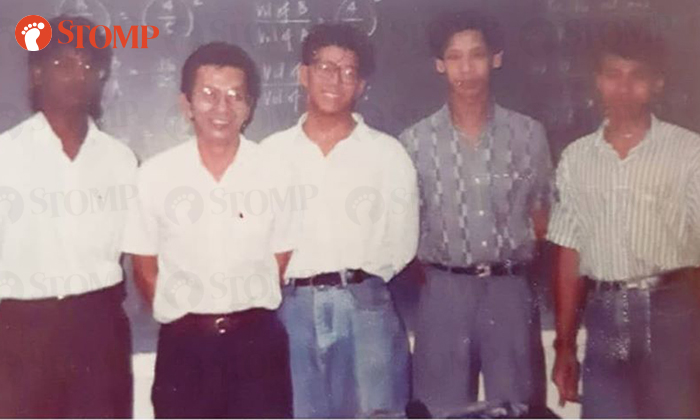 A Stomper, who successfully became an educator after failing math for 10 years and applying to the National Institute of Education (NIE) five times, is now looking for his teacher who encouraged him to keep going.

Stomper Anonymous contributed a photo of Mr David Tan back in 1986. In the photo, Mr Tan is the second person from the left and is in a white, short-sleeved top with black pants.

Anonymous said: "I have been failing math ever since I was a secondary school student in 1977, always getting an F9. I applied to NIE for the first time in 1984 but wasn't successful because I thought it was probably due to my math results."

Anonymous tried applying to other prospects after his application to NIE failed the second time, but these fell through as well.

He then decided to try again in 1986 and enrolled in night classes to take the 'O' Level Mathematics examination as a private candidate. That was when Anonymous met Mr Tan for the first time.

In the same year, the Stomper saw a slight improvement when he achieved an E8 for the examination.

He told Stomp: "It was a huge milestone as I've been getting an F9 since 1977. My family members said to me: 'What's the big deal, still fail,' but Mr Tan kept encouraging me.

"I returned to the night classes again the next year and told Mr Tan my grades. He said: 'It's an improvement! You told me you're very stupid in math but you're not, you just need more time. Come on, let's help you again!'"

On his second try in 1987, Anonymous achieved passing results for the Mathematics examination and got a C6.

"I just remember everyone making fun of me, no one encouraging me as I did my 'O' Level math again. They said I was a "condemn" case, cannot make it," Anonymous told Stomp.

The Stomper applied to NIE for the third time but was unsuccessful, so he became more determined. In 1988 and on his third attempt, Anonymous' Mathematics results jumped by two grades, achieving a B4.

He said: "It was a miracle. I was so motivated by Mr Tan who told me that I could do it as long as I practised.

"I applied again to NIE and this was already the fourth time but it wasn't successful. I decided to take a break and went back to Mr Tan, thanking him for helping me achieve the B4."

Anonymous told Stomp that he kept in touch with Mr Tan for about a year after that but lost contact.

He shared: "I took a break for the next two years and when I applied to NIE for the fifth time in 1991, I managed to get in. I have been a full-fledged educator for close to 30 years now.

"I'm looking for help in locating Mr Tan because Teacher's Day is around the corner. Every year, my previous and current students will come and say thank you to me. I'm thus always reminded of Mr Tan, because if it weren't for him, I wouldn't have become an educator.

"I want Mr Tan to know the impact he has had on my life and for everyone to know what a wonderful teacher he was.

"I'll never forget what he told me: 'You may take a longer time, but it doesn't mean it's the end of the road.'"